Are you a pirate video star?

Broadcasting yourself is popular but does it help your business?

Vendors seem to be champing at the bit in the video conferencing space. Is their persistence paying off? Some recent digging around suggests that the technology is gaining traction both officially and unofficially.

We asked around 200 people involved in workforce communication and collaboration about their official and unofficial use of video conferencing and video calling in their business. The official line can be seen in the figure below –just over 40 per cent of respondents claim widespread use of video across their business.

The number using the technology ‘unofficially’ is around a third. It is important to view this in context; respondents were from large organisations, where we would expect video conferencing to be more widely used. In the main, where unofficial use occurs, it is mirrored by official use. Limitations of the data aside, what we see is a picture of formal uptake on the one hand, and employees doing their own thing, on the other – with an overall reasonable level of adoption. 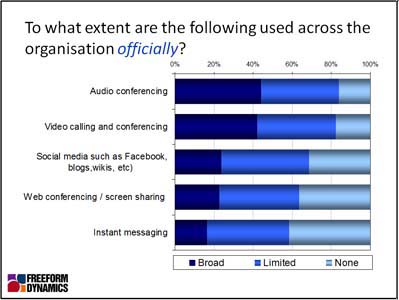 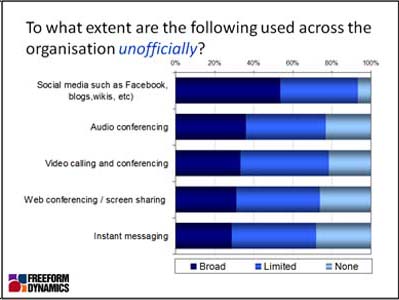 The rationale for using video isn’t rocket science and makes good sense: replacing travel to and from meetings seems like a valid option when travel budgets are under pressure. And surely it works so much better than audio conferencing? Multi-party audio conference calls, particularly when not everyone knows everyone else are usually muddled affairs at best. Video conferencing is designed to take the humble conference call to the next level, allowing those vital signs such as facial expression and body language to be captured.

In spite of the benefits, many users are still happy to muddle through with audio conference calls, or try and push for that bit extra in travel budget. Why might this be? There are two predominant reasons that spring to mind. For the record, these aren’t exclusive to video conferencing, but they do come up time and again with new technology implementations.

The first is whether or not the solution is fit for purpose - i.e. does it do the job it’s supposed to? This spans all aspects of the implementation – hardware, software, network capacity, firewall etc. If one of these isn’t properly addressed, then the system won’t do what’s expected of it and employees will simply reach for the phone next time.

The second reason relates to where video fits into an organisation’s overall communications strategy. Like any form of ‘advanced communications’ it is unlikely to be formally embraced by staff unless there is a real top-down drive to make it happen.

This includes ensuring that staff understand fully the rationale behind the implementation and have clear guidelines about its use. To some extent, unofficial use will act as a catalyst to wider and more frequent official use. In this and other areas, many organisations are getting to grips with the notion that their employees will find ways of assimilating their own personal technology habits and tweaks into their working routines. Taking a ‘glass half full’ approach, this could be seen as an opportunity to harness new ideas and best practices.

On a final note, there is still a question mark around where responsibility lies in terms of ‘getting it right’. Many businesses are happy to rely on vendors to tell them what they need, for a number of reasons – lack of available resources and lack of internal skills to name but two.

But there is adoption happening anyway, so one of the tasks ahead is to bring some consistency and cohesion to bear internally in the knowledge that there is a clear desire on behalf of the work force to use such advanced communications tools.

Could WFH web traffic topple a Brit telco? Pfff, scoff operators. This has nothing on Liverpool v Everton streaming

Absolutely everyone loves video conferencing these days. Some perhaps a bit too much

On Call Saving Sales from a self-inflicted dirty deed

Updated 'A legitimate solution to a poor user experience'