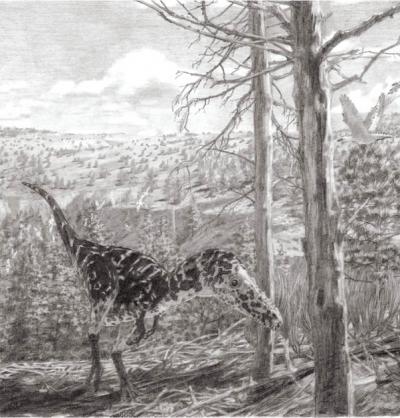 "Compared to Tyrannosaurus, this new animal is like a ballerina," says Stephen Brusatte of the American Museum of Natural History.

The new, more graceful tyrannosaur is named Alioramus altai. Its fossilised remains were discovered during a 2001 bone-digging expedition to the Gobi Desert in Mongolia co-chiefed by the Museum's paleontology chief, Mark Norell.

A. altai apparently has a similar skeleton to larger Tyrannosaur-type dinos such as Tarbosaurus, Alioramus, Gorgosaurus etc. But among these burly heavyweights, A. altai was surely the butt of cruel locker-room bullying and dino towel-snapping, weighing in at a puny 800 pounds or so - half the weight of the regular tyrannosaurs. The ballerina-esque, "gracile" A. altai also differed from the big boys in having horns and an elongated snout.

The comparatively sensitive and delicate little tyrannosaurs still liked meat, though, probably going for smaller prey as they would be unable to cope with really big bones.

Subscribers to the Proceedings of the National Academy of Sciences can read the new research here. ®