Putting the Meds into Social Media

Comment As the recession deepens, the strain appears to be getting to some of our best-paid business gurus and motivational speakers. It can't be easy to keep the fantasy economics of Web 2.0 going against all the evidence, and cracks seem to be starting to appear. I have two worrying exhibits for you.

Exhibit No.1 comes from the congenitally humourless Editor-in-Chief of WiReD mag, Chris Anderson. He's also the author of The Long Tail and Free, and he doesn't like academics who critique his work. Particularly when they come up with evidence that contradict his theories. How dare they?

"The academics are just confused," says Anderson in the video below, captured recently at the Commonwealth Club.

Anderson takes a blast at "academics who build a cottage industry in coat-tailing on pop economic theories - I guess had to find something to say so they get their statistics wrong." He has made the "coat-tailing" insult before: it does sound like an Emperor shooing the peasants off the lawn. If you're not as famous as Anderson, he's saying, you must not contradict him. 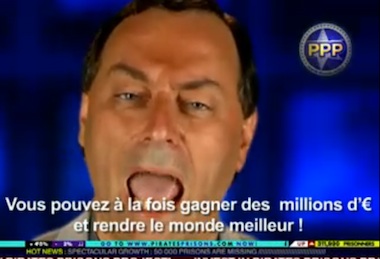 Exhibit No.2 is media node and self-styled "Futurist" Gerd Leonhard. "Have a good laugh," he advises for the following video, in a post whose URL is "watch-this-videos-have-a-good-laugh-then-think-again.html". Yes. Gerd has ways of making you laugh - although they may not apparent in this riff on Freetard persecution complexes.

So why are these premier Motivators looking so demotivated? What's gone wrong? Well, I too have a theory.

Men and their delusions are not easily prised apart. Both Anderson and Leonhard have seductive visions of what the future should look like, but they have absolutely no clue on how to get there. This vision of the future recedes by the day, as their proposals become more impractical and absurd. Yes, it's a cruel world, but they can see fault with everything and everyone, except their own faulty arguments. It's not so surprising, then, that bitterness and irrational behaviour result.

The good news is that once the condition has been accepted, then recovery may follow. But is there such a thing as Futurists Anonymous, where the healing process can start? ®