Windows 7 The agreement between Microsoft and the European Commission on the bundling of Internet Explorer means Windows 7 is cleared to ship with IE included later this month.

Microsoft's general counsel Brad Smith explained in a conference call: "Windows 7 will ship as planned - users will get Windows 7 then some time later they will get a Windows Update which will include the code to launch the ballot screen."

Smith said: "PC makers can continue to install any browser they want. Secondly, users can turn any browser on or off, and thirdly, for the next five years, users with Internet Explorer as their default will get a ballot screen so they can easily download, install and make the default another browser."

The ballot screen is displayed as a web page rather than a separate application, but Smith dismissed suggestions this was an issue. 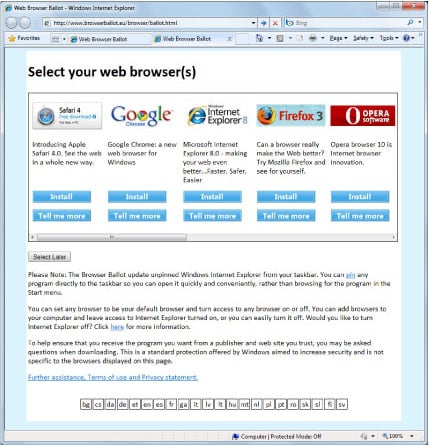 The main changes since Microsoft's original proposals in July were the inclusion of a screen to explain what web browsers are, "Tell Me More" buttons underneath each browser choice and the ability for the Commission to review the screen in future to ensure it is still fulfilling its competitive purpose. 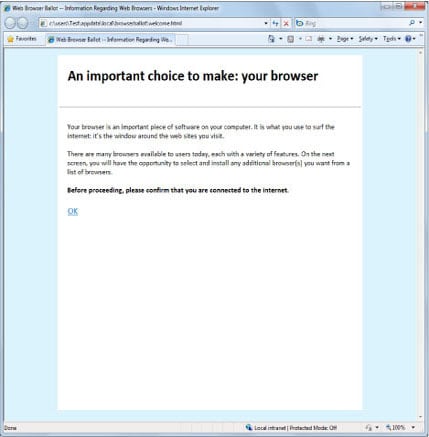 Meanwhile Opera - the Norwegian browser maker which has been most vocal in its criticism of the proposals - has been less than gushing in its welcome to the plan.

Håkon Wium Lie, Chief Technology Officer at Opera said: "Opera Software supports the concept of a ballot screen to give users easy access to better browsers. The important question is how this ballot screen is implemented. We are still studying the announcement from the European Commission and will have further comments at a later stage." ®