The US Army is doubling its fleet of moored spy balloons, deployed in overseas warzones to provide continuous unblinking overwatch around fortified American camps and bases. 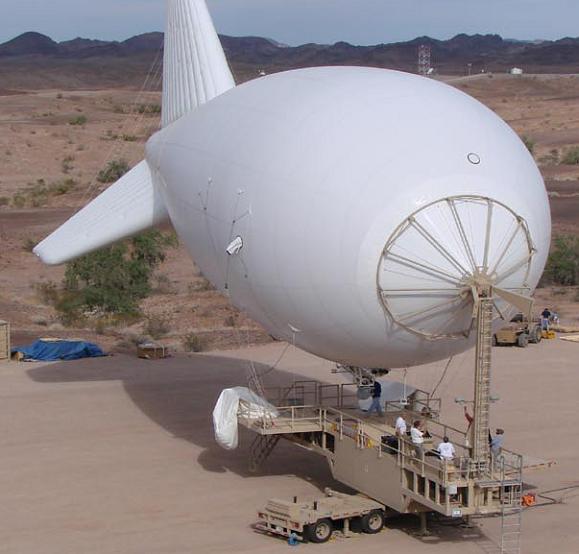 Giant, floating, all-seeing eyes in the sky r us

The PTDS is based on Lockheed's 74K (74,000 cubic foot) helium aerostat design, produced at the stupendous Airdock in Akron, Ohio - where the mighty flying aircraft carriers of the pre-war US Navy were built by Goodyear-Zeppelin in the 1930s, although nowadays it is owned by Lockheed. It's understood that the PTDS aerostats carry a ground-sweeping radar and accompanying thermal-camera systems, able to pick out moving objects across a wide stretch of terrain and then zoom in to identify them.

Such motion-detector/spyeye systems are also routinely deployed in other ways: manned or unmanned aircraft, or atop a fixed tower. Aerostats offer more height and thus more sweep area than is feasible with a tower - the 74K operates 1,500m up - and are able to stay up much longer and more cheaply than aircraft. They are invaluable for maintaining a watch over the area around a base, for instance, making it much harder for insurgents to mount rocket or mortar attacks or plant bombs in the vicinity.

The price of $16m apiece might seem a little high for a moored balloon, but this includes the sensors, ground station, supporting vehicles and generators etc.

The only thing lacking would seem to be a proper name: PTDS is frankly a bit dull. Given that we're talking about a huge, vaguely globular thing floating in midair with a variety of eyes on it, it seems hard not to suggest "Beholder" as an alternative. ®

For those unfamiliar with the Dungeons & Dragons monster portfolio, there's some explanation of Beholders here.