The wheels continue to roll, and fall off, of Steve Ballmer's pan-European tour of serious-minded national and broadcast media.

Stopping in the Netherlands, Ballmer dealt with the obligatory questions on whether Microsoft would build its own Kindle-style reader. We've been here before on hardware, when the wishful thinking and reporting was that Microsoft must be building its own mobile phone to answer Apple's iPhone hardware and software combo.

Clearly, the serious hacks of Europe do not pay close attention to Microsoft's business and partner model.

As Ballmer batted away these tough shots, back home doubts were being expressed about Ballmer's continued future as chief executive of Microsoft on the place where it matters most - Wall Street.

Windows 7, which Ballmer is promoting on his European tour rather curiously by downplaying expectations, will be an important measure of how Ballmer is viewed as Microsoft's top executive, according to one investor.

Rowe Price Group portfolio manager Ken Allen is reported to have told Bloomberg: "Windows 7 is important for how Microsoft is seen in the marketplace, especially after how Vista was received... it will be an important year for how Ballmer is viewed as CEO."

ISI analyst Heather Bellini, and a long-time Microsoft investment analyst, said Ballmer needed to go beyond scoring a hit with Windows 7 - he needs to make his own mark, and escape the shadow of co-founder Bill Gates.

"Being able to say: 'I took what someone else did and maintained it' is not a bad legacy, but it's not a great legacy," Bloomberg reported Bellini saying. "His legacy should be: What can he build on his own?"

Others are more critical in their assessment of Ballmer's nine-year tenure as CEO. "Ballmer needs to retire - it's been a huge disappointment from a shareholder's perspective," Hardesty Capital Management fund manager Dave Stepherson, told the news service.

Ballmer's future was something we first raised here on MicroBite. Now, it seems Wall Street is waking up. As far as investors are concerned, the chief problem is the company's not delivered sufficient return on its stock - which hurts investors' portfolios.

Microsoft's share price has fallen 53 per cent since Ballmer took over as chief executive in 2000. There have been mutterings for a while among money managers unhappy with the Microsoft stock in their portfolios.

Under Ballmer, Microsoft has grown new businesses out of nothing - in business software and in gaming with the Xbox console and software. It also succeeded in building a healthy presence for Windows on mobile phones. However, Microsoft also failed to anticipate, recognize or respond quickly enough to major shifts in computing and the rise in internet advertising and search - facts Ballmer is now paying dearly to correct.

In the last few years, Ballmer's signed off on billions of dollars in R&D and marketing to build and promote the Bing search engine - money Wall Street would prefer to have seen go into the stock.

Microsoft's Windows Mobile division did not anticipate the rise of touch-screen computing on a handset and it's lost market share in face of Apple, while RIM and Palm are revived.

Microsoft's mobile phone strategy was to play it safe by catering to a conservative business market, not to excite or innovate. Having lost market share in the last year, though, there's been a huge sucking in of staff from across Microsoft to mobile devices complete with a rush on roadmaps.

Under Ballmer, Microsoft's remained a mostly PC-based business, with Windows on the client and server and the Office desktop productivity franchise. Under Ballmer, though, the PC business went off the rails with Windows Vista. To be fair, much has changed in the Microsoft development organization that produced Windows Vista - hopefully for the better.

Things are looking up to the extent that even Apple's pin-up reviewer Walt Mossberg is warm and fuzzy on Windows 7. "I still give the Mac OS a slight edge," Mossberg wrote, "because it has a much easier and cheaper upgrade path; more built-in software programs; and far less vulnerability to viruses and other malicious software, which are overwhelmingly built to run on Windows. Now, however, it's much more of a toss-up between the two rivals.

"Apple will have to scramble now that the gift of a flawed Vista has been replaced with a reliable, elegant version of Windows."

Worryingly, just as reviewers say Windows 7 is good, Ballmer's telling people not to get their hopes up as early tests on Windows Vista also said gave positive feedback. "The test feedback has been good, but the test feedback on Vista was good," Ballmer said in is pre-European tour interview in Bloomberg. "I am optimistic, but the proof will be in the pudding."

With Windows 7 done, there are reports on what to expect in Windows 8 and Windows 9. The LinkedIn profile of a Microsoft Research employee, picked up by PC Pro, has surfaced that says Windows 8 and 9 will get 128-bit compatibility. You can view a screen grab below. 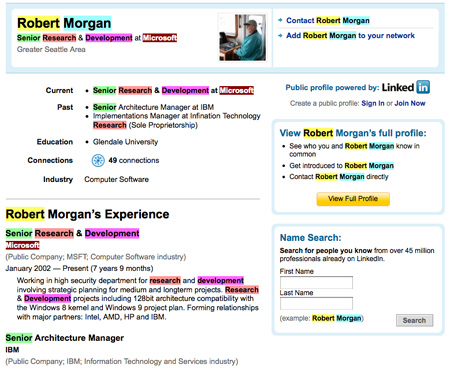 Future directions for Windows 8 and 9?

The real challenge for Ballmer, though, will be in how he helps Microsoft transition from a desktop, laptop and server operating system and applications company in to a leader in the supposed high-growth online services market, having spent billions of dollars that might have gone to investors or the money machine that is the core Windows franchise.

Also a company that builds exciting and compelling software for non-traditional computing devices, like smart phones, rather than just following somebody like Apple that has a habit of setting the pace.

Ballmer's success will be measured by market share, continued revenue growth, and how much it costs to take Microsoft in new directions.

Ballmer's response to Wall Street doubters on all of this, so far, has been the same locker-room coaching he's given partners of Microsoft also uncertain about the changes. He's told them to man up and move on.

It's the kind of pep talk that wins hearty admiration if the big bet pays off. It leaves ill feeling and robs the speaker of credibility if things don't.

Ballmer's talk on Windows 7, at least so far, hasn't been big enough to convince investors the CEO's on target and worth keeping. If Windows 7 doesn't deliver, and Microsoft continues to misfire on new forms of computing and service, then this could be one of SteveO's last tours of Europe as chief executive of Microsoft. ®