NASA says it is searching for aliens in the neighbourhood of San Francisco, using a Zeppelin. 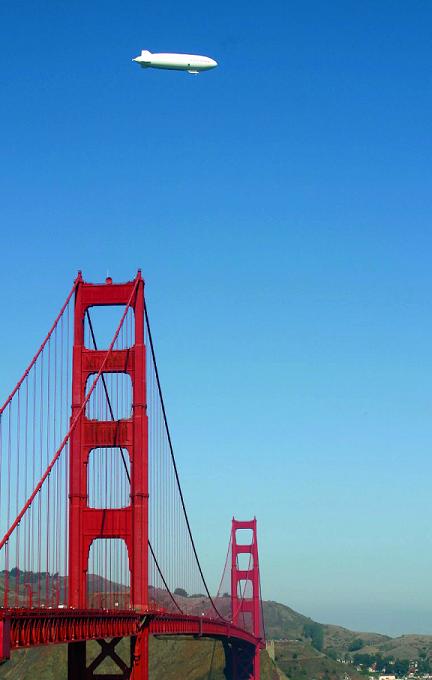 NT Zeppelins are unlike the blimps which make up most dirigible lighter-than-air traffic nowadays, as they don't maintain their shape entirely by inflation. There is a partial internal structure of glass-reinforced plastic and aramid, offering better stiffness and linking the propulsion, steering and gondola together. This means that the ships are technically speaking semi-rigids, more closely resembling the monster rigids of yesteryear than blimps.

Unlike most of the megaships of the old days, however, the NTs are inflated with helium and so avoid the fire and explosion risk associated with hydrogen*. They are also a good deal smaller.

Airship Eureka, however, is apparently quite big enough to carry a NASA "hyperspectral scanning imager" which "measures 256 bands of color imagery in the visible and near infrared spectrum". According to space-agency spokesmen, boffins from NASA's Ames research centre (handily co-located with Airship ventures at former US Navy airship base Moffett Field) are chuffed as ninepence to make scientific measurements using the dirigible as a platform.

In particular, the Ames brains are apparently using the hyperspectral scanner aboard Eureka to look for "extremophile" alien-like life, possibly intelligent, in the vicinity of San Francisco. According to NASA:

In collaboration with the Search for Extraterrestrial Intelligence (SETI) Institute, scientists studied the extremophile biota in the south bay salt ponds using the hyperspectral scanning imager to identify photosynthetic pigments.

The agency also talks of other, perhaps even more radical research to be carried out by its Californian dirigible-riding boffins.

“We are very interested in the unique capabilities of the Zeppelin to enable remote sensing and [other things] not previously practical,” says Stephen Dunagan of NASA Ames.

It's not immediately clear how an airship would help with remote viewing - aka "psychic spying" - though it's always possible that Dunagan means some other kind of remote sensing. ®

*People who believe that hydrogen is perfectly safe for use in airships because the Hindenburg was "painted with rocket fuel" or something - please take it up with the Zeppelin engineers, not us. Maybe have a read of this first, too.