Idle wild: how Intel's mobile Core i7 speeds up to slow down

Turbo Boost, Thread Parking and the drive for low-power performance

Intel's first mobile Core i7 processors - codenamed 'Clarksfield' - incorporate a feature the chip company is calling Turbo Boost. It's not new - the technology is a part of every 'Nehalem' architecture-based CPU the company has released to date.

So, Turbo Boost can be found in desktop chips and it's in Xeon server parts too. But it really comes into its own in processors produced for laptops. 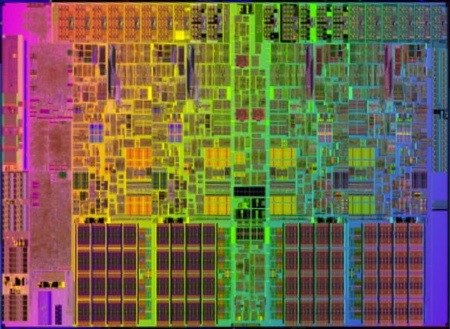 Intel's Clarksfield: all four cores can be powered down to zero

The mobile Core i7s are all quad-core parts, and while model numbers and operating clock frequencies differ, Turbo Boost works the same way in each case. The technology takes feedback from on-chip thermal sensor and watches how the operating system is scheduling work on the available cores. Using both sources, Turbo Boost sees if it can lift the chip's clock speed and operating voltage above baseline.

If an application is only making use of two of the four cores, the remaining pair of processing units can be powered right down to zero, dropping the chip's overall thermal output and allowing the two running cores to be clocked anywhere up to 3.06GHz.

A one-thread, one-core application presents even more room for lifting the clock frequency as the other three cores are sent to deep sleep, slashing the heat coming off them and, in turn, allowing Turbo Boost to up the one core's clock frequency up to 3.2GHz - 60 per cent higher than the stock clock speed.