Pics NASA has released new images from its spy satellite orbiting the Moon, showing the twin impacts at the lunar south pole of the iceberg-hunting probe which struck there on Friday. 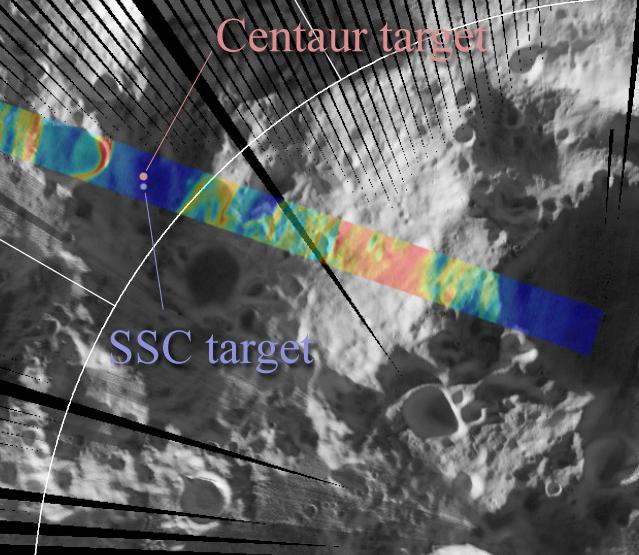 Hotspots produced by the pole-diver craft.

The LCROSS (Lunar Crater Observation and Sensing Satellite) mission saw a spent Centaur rocket stage make a high-angle, high-speed dive into the Cabeus crater in the lunar antarctic. This was followed minutes later by a "shepherding spacecraft" (SSC), specially built to first steer the empty rocket in, and then dive through and sniff the cloud of debris kicked up by the Centaur.

The freezing crater deeps of the lunar poles contain many areas which never see sunlight, and it is possible that there are substantial deposits of water ice there. Minuscule amounts of water are also thought to exist in normal sunlit regions, but this would be very hard to extract.

Exploitable reserves of water would be hugely useful for exploration of the Moon and perhaps for space operations in general. Water could be used to produce hydrogen for rocket fuel, and this could be important even for operations in Earth orbit - it would potentially be easier and cheaper for spacecraft and operations there to use fuel from the Moon, rather than supplies boosted up through Earth's more powerful gravity and troublesome atmosphere.

Hence NASA's efforts to find out if there might be water deposits in the chilly, eternally dark polar craters. The LCROSS impacts were watched with great interest on Friday, but disappointingly it appeared that no debris was thrown high enough above the obscuring crater walls to enter sunlight and so be visible to ordinary visual observation. Neither Earthly telescopes nor the plunging LCROSS follower saw any sunlit plume after the two-ton Centaur smashed into the deeps of Cabeus, and the follower craft similarly appeared to have little effect.

However, NASA had another card to play. The Lunar Reconnaissance Orbiter (LRO), which went into space atop the same booster stack as the LCROSS, has been orbiting the Moon since June. Given the lack of any lunar atmosphere, the satellite can orbit safely just 30 miles up, scanning the surface beneath with an array of instruments.

Just 90 seconds after the LCROSS craft plummeted into Cabeus, the LRO made its first pass overhead. Over the weekend NASA assembled imagery of the strike zone, and pictures were released yesterday.