Rainforest similar to ours flourished at 3-5° hotter

Fossil boffins say that dense triple-canopy rainforests, home among other things to gigantic one-tonne boa constrictors, flourished millions of years ago in temperatures 3-5°C warmer than those seen today - as hot as some of the more dire global-warming projections. 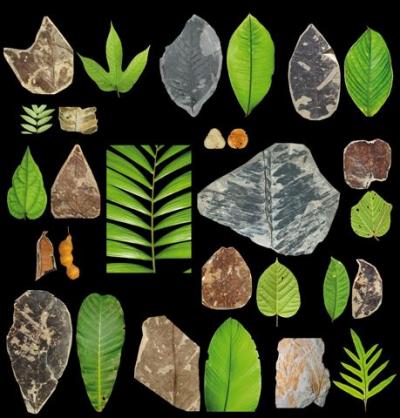 Just like a modern jungle. Except with bloody enormous snakes.

The new fossil evidence comes from the Cerrejón coal mine in Colombia, previously the location where the remains of the gigantic 40-foot Titanoboa cerrejonensis were discovered. The snake's discoverers attracted flak from global-warming worriers at the time for saying that the cold-blooded creature would only have been able to survive in jungles a good bit hotter than Colombia's now are.

But now, according to further diggings, there is more evidence to support the idea that a proper rainforest similar to those now seen in the tropics existed at the time of the Titanoboa - despite the much hotter temperatures. This could be seen as conflicting with the idea that a rise of more than two or three degrees would kill off today's jungles with devastating consequences for the global ecosystem of which we are all part.

"Rainforests, with their palms and spectacular flowering-plant diversity, seem to have come into existence in the Paleocene epoch, shortly after the extinction of the dinosaurs 65 million years ago," says Carlos Jaramillo of the Smithsonian Tropical Research Institute. "Forests before the mass extinction were quite different from our fossil rainforest at Cerrejón. We find new plant families, large, smooth-margined leaves and a three-tiered structure of forest floor, understory shrubs and high canopy."

Jaramillo and other boffins from the parent Smithsonian Institution in the US probed fossilised leaf remains and identified the plant families Araceae, Arecaceae, Fabaceae, Lauraceae, Malvaceae and Menispermaceae - which are apparently "still among the most common neotropical rainforest families".

The scientists say that leaf fossil evidence and the very size of the Titanoboa indicate that the jungles of the Paleocene saw temperatures of 30-32°C, as opposed to the 27°C common in the Colombian rainforest today.

A common goal of global-warming reduction efforts is to limit temperature rises to 2 degrees, though some say this is unachievable and a rise of at least 4 degrees is inevitable. The well-known Intergovernmental Panel on Climate Change (IPCC) report of 2007 predicted a rise of 3 degrees by 2100.

The new research could mean that - assuming the warming arrives on schedule - that the world's jungles will not turn to desert as is sometimes expected. Rather, a picture more like that of 65 million years ago might emerge.

"We're going to have a novel climate where it is very hot and very wet. How tropical forest species will respond to this novel climate, we don't know," senior Smithsonian boffin S Joseph Wright told the IPCC at the time.

Fortunately nobody seems to be suggesting that global warming will see the return of enormous 40-foot constrictors. Even the humdrum modern snakes of today's rainforest occasionally perform gut-busting feats such as scoffing entire jaguars, so Titanoboa would presumably have regarded a human being as merely a light snack.

It's possible that the lush superwarm jungles of the globally-warmed future might be a bit less diverse than today's, however, as it seems that the old-time ones were.

"We were very surprised by the low plant diversity of this rainforest. Either we are looking at a new type of plant community that still hadn't had time to diversify, or this forest was still recovering from the events that caused the mass extinction 65 million years ago," says Scott Wing, another Smithsonian scientist involved in the studies.

The scientists say their latest research will be published in the Proceedings of the National Academy of Sciences journal shortly. ®