Many Lloyds TSB business customers who use Firefox as their default browser are currently unable to access their online banking accounts.

Several readers have contacted The Register telling us that the service is throwing up an error message when they attempt to logon to the site via the world's second most popular browser.

Forums are also abuzz with complaints about what appears to be a sudden lack of compatibility for Firefox on the Lloyds TSB website.

"Sorry we are unable to progress with your request 139212 - You entered one or more unexpected punctuation characters such as \ ; " ! * ~ ^ < > . These are not permitted. Please hit the back button and try again," is the error message many have reported over the past few days.

One El Reg reader and Lloyds TSB customer told us he had contacted the website's internet banking helpdesk to try and find out why the firm was suddenly shunning Firefox. Lloyds TSB responded by saying the bank doesn't currently support the Firefox browser, and instead advised the customer to use Microsoft's Internet Explorer. 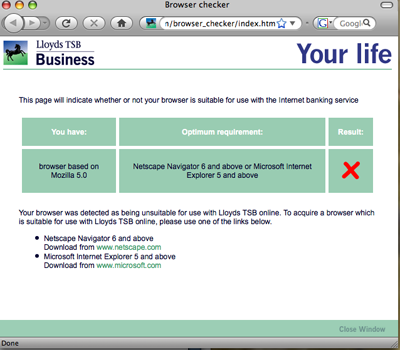 Lloyds TSB, not a Firefox lover

Despite the obvious technical cockup affecting an unknown number of its customers, some have claimed that Lloyds TSB has so far failed to respond adequately to the problem.

A spokeswoman at the banking giant said that Lloyds does support some flavours of Firefox, but a quick look on the firm's browser checker tool seems to suggest otherwise. It clearly states what the online banking service does and doesn't support, and it would appear that most browsers are shunned by the Lloyds TSB online banking system.

"Your browser was detected as being unsuitable for use with Lloyds TSB online," reads a message that shows zero love for Mozilla's Firefox, but gives the thumbs up to Internet Explorer (understandable given it's the leading browser) and Netscape Navigator (which is a bit odd, really). ®