Crowsnest-cam to scan the 'Sea of Krakens'

NASA has boffins working on plans to send a nuclear-powered robot boat to cruise the chilly patio-gas oceans of Titan, ice moon of Saturn. 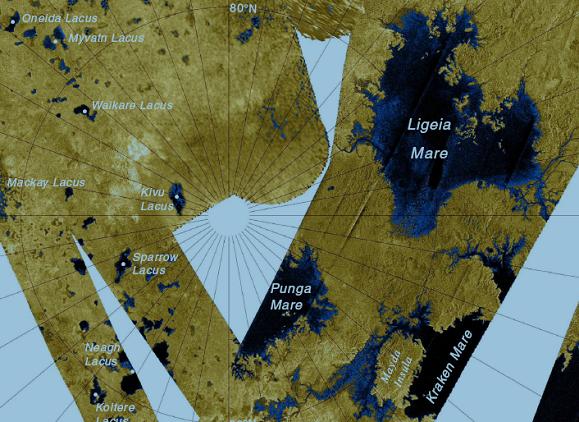 Stofan's latest project is an interplanetary probe with a difference. Various different landers and spacecraft have been sent out by humanity to visit the worlds of the solar system: most have simply remained where they set down, and a few have trundled about on wheels. This time, the idea is to send out an exploration robot which would float, and be propelled about by the wind.

"The overwhelming reaction I get from scientists and engineers is, 'Oh, that's really cool'", Stofan told National Public Radio in the States. "I mean, people are just instantly kind of excited and intrigued to say, 'Could we really go do this?'"

The answer, apparently, is yes. The idea would be to deploy a small capsule which would splash down into one of the huge, Great Lakes-sized bodies of fluid found in the arctic region of Titan - probably either Ligeia Mare or Kraken Mare*, the largest known bodies of liquid off Earth. The seas of Titan, however, aren't briny like those of home: rather, boffins believe, they are made up of liquefied hydrocarbons such as methane, ethane and propane - pretty much the same stuff as one finds in the canister fuelling one's patio heater or barbeque, but needing no pressure container to stay liquefied in the bracing -180°C temperatures prevalent on the Saturnian moon.

The float-boat capsule probe is referred to at the moment as Titan Mare Explorer (TiME). It wouldn't have sails as such, though it would feature a mast supporting a crowsnest camera for a better view, but it would nonetheless be propelled across the LPG depths by the nitrogen winds of Titan. It wouldn't be able to power its systems using solar power in the fashion of recent Mars rovers and and landers: the Saturnian system is far from the sun, and anyway Titan's atmosphere is full of clouds and drizzle - made up of methane, of course, rather than water.

Thus the robotic windjammer would instead rely on a new type of nuclear-power cell being developed at NASA, the so-called Advanced Stirling Radioisotope Generator (ASRG). Like ordinary radioisotope batteries, used for decades in deep-space probes and spy satellites, these produce heat by radioactive decay (as opposed to artificially-encouraged fission as in a reactor). But the ASRG uses this heat to drive a Stirling-cycle engine and run a generator: NASA assess that a 21-23kg ASRG could put out 150 watts for 14 years. TiME would have a nominal window of three months after landing with the Earth above the horizon for data transmission, but the ASRG's long life would offer a chance for more information from it the following year.

Stofan and her colleagues are getting a proposal together for NASA to consider under its "Discovery" programme, intended to carry out relatively inexpensive space science missions. If the nuclear robot windjammer plan is selected, TiME would lift off from Earth in 2016 and splash down in the Ligeian or the Sea of Krakens in 2022. Other radical notions for Titanian probes include helicopters and balloons.

An interesting presentation from Stofan can be viewed here (pdf). There's more on the sailing-probe ploy here from Space.com, and an earlier report from NPR here. &ref;

*Roughly translated, the "Ligeian Sea", after the Greek siren; and "Sea of Krakens" or "Kraken Sea", referring to the large mythological sea monster.