More than just an interim enhancement?

We thought Blu-ray movies looked pretty good on our TV but they looked and sounded fantastic on a computer. BD-Live features were actually easier to operate from a PC too, especially with those that require you to register your details. CyberLink's ubiquitous PowerDVD makes an effective movie player for both Blu-ray and DVD, even if its interface is unnecessarily fiddly. We experienced no slipping, catching or sync problems at all. 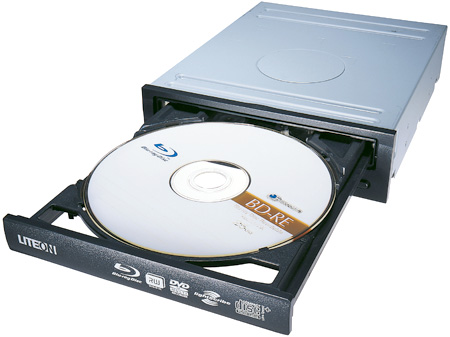 The drive comes supplied with user-swappable fascias: choose between silver or black

Also included was Instant Burn, a system tray utility that allows you to copy files to rewritable discs in real time, as if they were conventional media, by keeping their sessions open. Despite the complexity of software, the Suite is presented using a task-based interface, so you just pick a task and let the Suite determine which program to launch.

Label Print was notable for integrating with the iHES208's LightScribe support. So, as well as being useful for printing stick-on CD labels, the software can etch the same label information onto the top surface of LightScribe media. The process is slow (graphic designs with picture backgrounds can take 20 minutes or so) but the results are more durable than stick-on labels and direct print-on CDs.

We found certain other programs in the Suite to be less compelling. Photo Now! and Power Backup, for example, are only likely to get used if you have no alternative. Power Director and Producer, however, although a bit plain in appearance, are very effective programs for domestic users wanting to get their home movies onto DVD without too much effort.

While the ability to write to Blu-ray media remains a high-end aspiration for most of us for some time to come, this iHES208 combo drive is just the trick to fill the gap. The £110 price tag looks a tad expensive at first, but the wide versatility of the hardware and the unexpected generosity in the software bundle make it decent value – for the time being. ®

This time with LightScribe on board

But Sony broke it first

Review Optical extras on the go

Review Ready for any disc format. Ready for your netbook