Disney has reportedly, and unsurprisingly, taken exception to an Oz booze campaign which features "Ho White" puffing on what we assume is a post-coital ciggy in a bed full of dwarves.

The offending pic, created by ad agency The Foundry to promote Jamieson's Raspberry Ale, carries the caption "Anything but sweet": 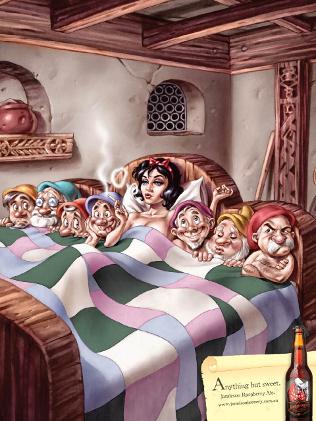 The Foundry admitted to Sydney's Daily Telegraph it'd had "a little bit of contact" with Disney, and the fact that the campaign's official website - anythingbutsweet.com - is now no more suggests a bit of legal sabre-rattling.

The UK's Daily Telegraph rather brilliantly describes it as "unlikely" that Disney, "which runs the family-friendly Disney theme parks and is known for its cartoon feature films aimed at children, would agree to Snow White's image being used to sell beer". ®

Two less lovely phone booths in the world, and it's going to be fine