Pic NASA chiefs have insisted that their recent mission to crash a pair of spacecraft into the eternally-dark crater deeps of the lunar south pole - which seemed at first look to have produced underwhelming results - was in fact a "smashing success", with definite evidence of a debris plume detected. 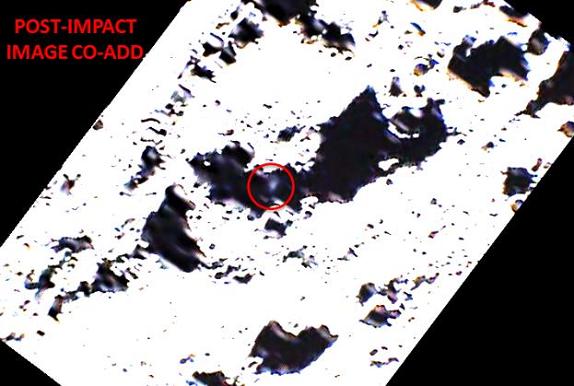 Squint really hard and you can see it.

The Lunar CRater Observation and Sensing Satellite (LCROSS) mission saw an empty Centaur upper-stage booster pile into the Cabeus crater in the high lunar antarctic ten days ago, followed minutes later by a dedicated "Shepherding Spacecraft" which had guided the Centaur from Earth.

NASA bigwigs had intended that the polar prangs would hurl up a mighty miles-high cloud of debris, so tall that its top would emerge into sunlight above the towering walls of Cabeus. The depths where the spacecraft struck are always in shadow, and consequently very cold - cold enough that NASA hopes there might be substantial deposits of frozen water ice to be found there.

It's now known that there are minuscule amounts of water throughout the lunar crust, but vast amounts of regolith (moon dirt) from ordinary sunlit regions would have to be processed to obtain much. Proper, easily-mined icebergs would be splendid news for future lunar explorers - and even for space travel in general. Hydrogen from lunar ice would be an ingredient for rocket fuel - rocket fuel which wouldn't have to be hauled up through Earth's powerful gravity and thick atmosphere.

In decades to come, some analysts think, lunar ice-mine propellant could be cheaper to use than supplies from Earth, even in Earth orbit.

Thus it was disappointing when a watching world, using telescopes both on Earth and in space, saw no obviously visible sign of a debris plume following LCROSS' high-speed death plunge into Cabeus. But now NASA has issued a statement saying that in fact large amounts of data were gleaned during the strike, and that the space agency is thoroughly chuffed with the way the ice-mine prospecting mission is panning out. Faint visible-light images of a big plume from the Centaur impact have now been discerned in pictures sent back by the follower spacecraft during its final minutes.

"We are blown away by the data returned," says Anthony Colaprete, LCROSS chief. "The data appear to be of very high quality. There is a clear indication of a plume of vapor and fine debris."

According to Colaprete and his team:

LCROSS also captured emissions and absorption spectra across the flash using an ultraviolet/visible spectrometer. Different materials release or absorb energy at specific wavelengths that are measurable by the spectrometers.

With the spacecraft returning data until virtually the last second, the thermal and near-infrared cameras returned excellent images of the Centaur impact crater at a resolution of less than 6.5 feet (2 m). The images indicate that the crater was about 92 feet (28 m) wide.

It wold seem then that NASA is confident that it will soon know just what kind of stuff the LCROSS probes smashed into down in the gloomy depths of Cabeus. As yet, however, there's no word on the amount of ice thought to be present.

Meanwhile as the LCROSS boffins sift the data from the lunar pole-shot, the Obama administration is pondering the various options presented by the recent Augustine inquiry into the future of US manned spaceflight. President Bush had laid out an ambitious roadmap featuring an imminent return to the Moon followed by boots on Mars in the 2030s, but sufficient funds weren't forthcoming.

A big ice discovery in Cabeus would suggest a significantly cheaper future not just for Moon exploration but perhaps for all space voyaging, so there's a lot riding on the LCROSS results.

There are more images from NASA here. ®