With so many firms jumping on the 3D TV bandwagon, Sony has obviously felt compelled to push the envelope further still. So it has developed a 360° 3D display.

Confused by the term? You shouldn’t be, because the prototype display is essentially a tube-shaped unit able to show a 3D image to anyone looking at it from – presumably - a face-on angle. 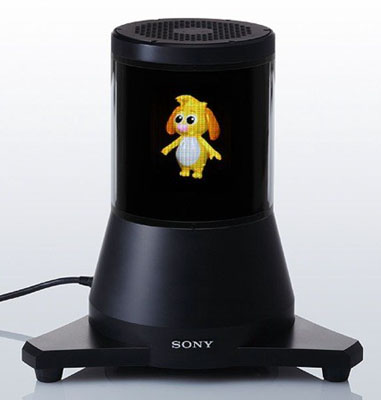 Sony's 360° 3D display could be used for videocalls

It isn’t yet clear if all viewers all see the side of the 3D image, irrespective of their viewing angle, or if you see a different side of the image depending on how you're facing it.

The display also works without glasses, Sony claimed. In its current form, the 13cm wide by 27cm high unit can display images in 24-bit colour.

Research and development into the screen’s capabilities is still ongoing, Sony said. But the electronics giant believes that the 3D tube could potentially be used as a 3D photo frame or adapted as a new take on the videophone.

Sony has prepared a demonstration video about the 3D tube, but won’t release it until 22 October – the first day of the Digital Contents Expo 2009 show in Tokyo. ®