Headed for the future or the scrapheap? 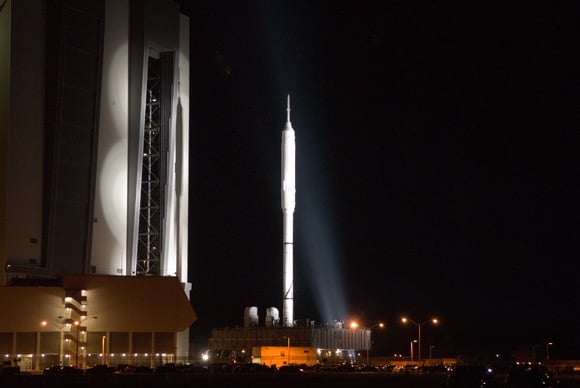 The vehicle, described by NASA as the "essential core of a safe, reliable, cost-effective space transportation system" and built on "cutting-edge launch technologies, evolved powerful Apollo and space shuttle propulsion elements, and decades of NASA spaceflight experience", represents the trailblazer for the agency's Constellation programme.

The rocket is designed to carry the all-new "Orion crew exploration vehicle", which NASA hopes will be making it first trips to the International Space Station "early in the next decade", and thereafter carrying humans "back to the Moon, and then onward to Mars and other destinations in the solar system".

For the test flight, the Ares I-X will carry a dummy upper stage to an altitude of 40km (25 miles), while sensors measure the vehicle's performance. The dummy stage will be lost when it impacts with the Atlantic, while the solid booster will parachute down to an ocean recovery.

Trent Smith, the vehicle processing engineer for the Ares 1-X, told the BBC: "It's a tall rocket; it's been over three decades since anyone has built a rocket this tall. That was the Saturn V.

"We have over 700 sensors on this rocket; and the whole point of Ares 1-X is to understand how does a rocket this shape, this weight, this tall actually fly." 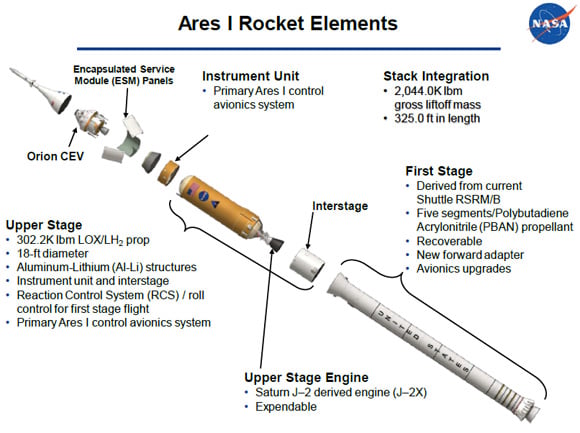 The third element of Constellation is the Ares V heavy lifter, NASA's "primary vessel for safe, reliable delivery of large-scale hardware to space - from the lunar landing craft and materials for establishing a Moon base, to food, fresh water and other staples needed to extend a human presence beyond Earth orbit".

The Ares V will employ a couple of solid rocket boosters, similar those those used for the Ares I, bolted to a core stage powered by six RS-68B engines - "upgraded versions of those currently used in the Delta IV". Atop that is the "Earth Departure Stage" powered by a single J-2X Engine.

That's the idea, but the Obama-appointed Review of US Human Flight Plans Committee last month cast serious doubts on the future of NASA's entire human spaceflight programme, concluding that unless more cash was forthcoming, the whole thing was on an "unsustainable trajectory".

NASA hopes to retire the shuttle in 2011, de-orbit the ISS in 2016, and then press on with a return to the Moon. However, the committee concluded that under the current budget, the Ares I and Orion would not be available until after the ISS is de-orbited, the Ares V would not be available until the late 2010s and, "there are insufficient funds to develop the lunar lander and surface systems until well into the 2030s, if ever".

The upshot of all this is a possible scrapping of the Constellation project in favour of other technologies capable of, in the short term, supplying the ISS, and thereafter driving NASA's return to the lunar surface.

Even a return to the Moon is not a foregone conclusion. Many, including Buzz Aldrin, suggest the US should ignore the Moon (been there, done that) and set its sights directly on Mars. ®