American neuroscientists say that men who voted for Republican candidate John McCain in the recent presidential elections suffered a serious loss of testosterone as a result of the Obama victory. The hormone, produced by one's wedding-tackle, is considered essential for basic manliness. 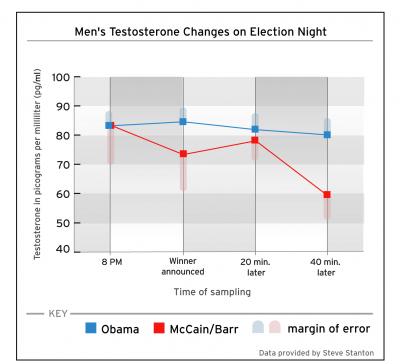 The revelation of US rightwingers' sudden emasculation following the 2008 election comes from Duke University neuroscientist Kevin LaBar. LaBar and his colleagues carried out a study on election night in which saliva samples were taken from both men and women both prior to the election and then at intervals after. Participants also filled in a questionnaire.

The results were clear-cut. Men who had voted for McCain - or the libertarian candidate Robert Barr - experienced a 28 per cent loss of testosterone almost as soon as the contest was over. LaBar notes that levels of testosterone, produced by both male and female gonads but in much larger amounts in men, are directly linked to important masculine behaviours such as "aggression, risk-taking and response to threats".

Apparently the male GOP and Barr voters reported feelings of "unhappiness" and "submissiveness" following the crushing defeat of their chosen national leaders.

"This is a pretty powerful result," says LaBar. "Voters are physiologically affected by having their candidate win or lose an election."

According to some theories, men are programmed to cut their testosterone headbanger hormone automatically after a group or individual contest is clearly lost. This is thought to have evolved as a mechanism for avoiding damaging injuries or killings following tribe or group pissing-matches long ago in humanity's distant past. By contrast those on the winning side retain standard levels of aggression and risk-taking.

LaBar and his colleagues report that testosterone levels among women and Democrats in the trial were unaffected.

The study is published this week in the journal PLoS One. ®