Once filled with an injection of methanol solution, Dynario is able to generate electricity that can be transferred to, say, a mobile phone or MP3 player over a USB connection.

Dynario measures 150 x 21 x 74mm, weighs 280g when empty and has a 14ml fuel tank capacity – meaning that each fuel cartridge will give you at least three full refills. 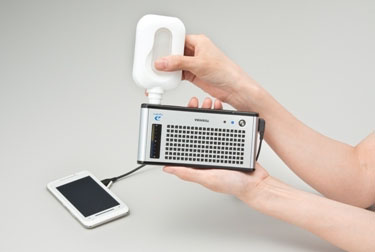