Hopping on the grave of Windows Vista

October 22 has arrived, which means Microsoft can stop defending Windows Vista and start pretending it never happened. Eyes have now turned to Windows 7, while Windows Vista joins Microsoft Bob and Windows Me in the annals of underachievers past. Well, except for all those people who are still stuck with the thing.

To celebrate the virtual end of Windows Vista, Microsoft held a Windows 7 launch party Thursday morning in New York City. The SoHo venue looked like the sort of oh-so-trendy club you’d see on Sex in the City, with the requisite flashing lights and thumping electronic rhythms, as a crowd of tech journalists and other attendees gathered to see a product that everyone already knows about.

Needless to say, the crowd was far less fashionable than the venue.

Microsoft undoubtedly lacks Apple's Jobsian flair for revealing new stuffs. But Steve Ballmer was very proud of the fact that so many people have already used Windows 7, citing - repeatedly - that the beta had more than eight million testers in more than 200 countries.

As the clock approached the 11am party kick-off, the room was treated to a string of "I’m a PC" adverts featuring little kids connecting cameras to laptops and demonstrating their general ability to use a computer.

Then the room was treated to a very special guest: Kylie, a four-and-a-half-year-old from those adverts. (She’s now five-and-a-half). Kylie announced to the assembled throng: "I’m a PC and here’s Steve Ballmer."

Big Steve duly appeared, engaged in some happy-chat with Kylie, and gave her a pink laptop. Here's hoping that wasn't her only payment for appearing in a national TV campaign. 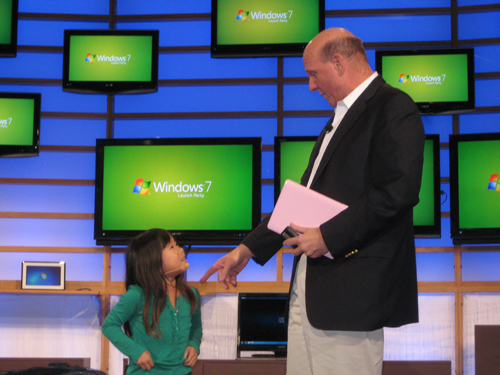 Warm and fuzzies: SteveO introduced by "I'm a PC" Kylie

Sadly, Ballmer was a lot less, um, energetic than we usually find him at such public appearances. He didn’t yell. He didn’t turn red. He didn’t even stomp on an iPhone. He seemed very, believe it or not, scripted.

Big Steve started out by telling the crowd exactly what Microsoft is up to with this Windows 7 thing. In his words, Redmond set out to make Windows 7 "simpler, faster, more responsive" - aka not Windows Vista. According to Ballmer, Windows 7 was designed in large part in response to feedback from partners and Windows users. Ballmer referred to this collaboration as "the secret sauce". Cue the eight million beta testers bit.

He also said that Microsoft had three major goals in mind for this new OS: faster boot times, making it easier to perform common tasks, and providing a platform for partners to innovate new products. But we would hope those are goals for any new operating system.

Then Ballmer burbled about something called "life without walls." This marketing tagline refers to the company’s strategy for integrating systems and devices more seamlessly - allowing your PCs, televisions, mobile phones, and digital picture frames to connect, and communicate. The crowd applauded. Not a pedant in the room, apparently. It would seem that without walls, you have no place to put Windows. But so be it.