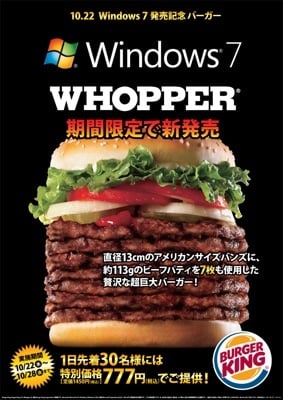 Burger King's Windows 7 Whopper is on sale in Japan

The software-sponsored sandwich is filled with not one, not two, but an unbelievable seven meat patties. The burger went on sale in Burger King outlets in Japan today to mark the major OS upgrade.

Our Japanese isn’t great, but the poster – which comes direct from BK’s Japanese website – appears to suggest that the Windows 7 Whopper will be on sale in the country until 28 October.

Should Burger King bring the monster meal to Microsoft fans in the rest of the world? Or would you rather wait for your Mac OS X 10.7 tofu treat?

Scupper that, a real pirate would've manned the cannons

Yuletide cheer for Wing Commander Andy Green and the team

UK banking TITSUP*: This time it's Clydesdale and Yorkshire banks

You must be yolking: English pub to launch eggstravagent Yorkshire pudding

Giveaway Would you eat it? Tell us why and you could win some Reg merch

Islamic fundamentalists force Yorkshire IT shop to chop off brand

Jihadi-nough room for one ISIS in hazardous environments