Ergonomics, we've heard of it

Review For a company that pioneered the widespread use of the mouse as a computer controller, Apple has a surprisingly bad record at making good ones, particularly since the return of Steve Jobs and, with him, industrial design as the prime driver of product creation.

Magic Mouse: Apple gets it right at last?

Past Apple mice have either been ergonomic non-starters or have tripped up before even reaching the longevity hurdle. Who can forget the finger-crimping nightmare that was the circular 'hockey puck' mouse that shipped with the first iMac and the blue'n'white Power Mac G3?

Even its more hand-friendly successor was never entirely comfortable, thanks to its oddly pivoted button, which filled the entire upper surface of the mouse. That complete-surface button design was maintained when Apple introduced the Mighty Mouse. While adding the ability to - at long, long last - detect secondary, 'right button' clicks, this mouse also sported a tiny trackball that, initially useful, later stopped working properly as its mechanism filled with grease and dust.

Unwilling to do anything so... well... Windows as add a scrollwheel, Apple has thought different again. And this time it might finally have a mouse that stands the test of time and doesn't herald a new era for RSI lawyers.

Launched this week, the Magic Mouse - daft name - drops the Mighty Mouse's touchball in favour of a multi-touch surface like a kind of gently curved, shiny white trackpad. The single, total-surface button is still there, but it's easier to trigger than the one used in past Apple mice. And by flipping a switch in the new Mouse control panel - it's not enabled by default - it easily picks up right clicks. 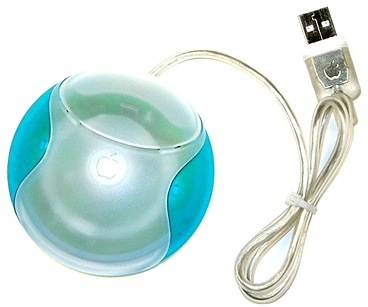 Its record is not good...

The Magic is less oblong that the Mighty. Looking down on it, you can see no straight lines at all. Once again, it's horizontally symmetrical so it should suit the sinistral as well as the right-handed. It doesn't feel as thick as the Mighty and it's certainly more narrow, maybe too narrow for some. Anyone who likes to grasp their mouse tightly within the palm of their hand or has stubby digits isn't going to like the Magic's long design, but folk who steer mice with the tips of their long, thin fingers will.