When Freeform Dynamics asked you for your opinion of your mobile phone, you didn’t hesitate to give it to us. Both barrels, in some cases.

We asked you a bunch of multiple-choice questions which delivered some interesting statistical information. But we also asked you to comment here and there. Your replies gave us some real insights into your likes, dislikes, desires and expectations.

Because El Reg is a broad church, we expected a polarisation of opinion according to your role in life. In fact, you were all more or less in agreement with respect to how you like to use your phones. Job title made only a few percentage points difference to your preferences. Such consensus suggests that mobile phone makers would do well to listen to your views.

Apart from making and receiving calls, figure 1 shows you what you use your phones for. Apart from the guy who said he likes his phone because it has an ‘off’ switch, most of you seem to have made it a central part of your life. But, as you can see, listening to music and playing games are low on the average reader’s list of priorities, especially when you look at the sum of the ‘A lot’ and ‘A little’ rankings. 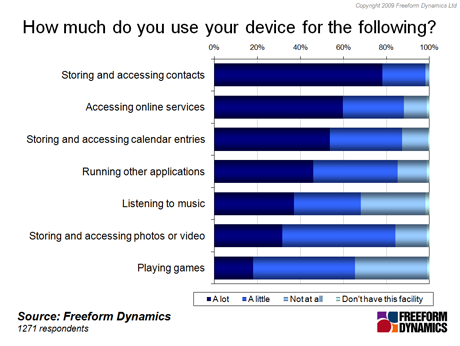 Knowing what you like to do with your phones, how easy do they make it for you? 741 people commented on this question and the largest group (14 percent) said they liked shortcut keys or icons for quick access to the most-used functions. The next most appreciated things were full keyboards and trackballs, followed by touch screen and general ease of use. It seems like all is well in the mobile world. But, actually, it’s not.

When asked what they don’t like about navigation and access, of the 731 respondents, 22 per cent put keypad and touchpad issues top of the list. They wanted bigger keys, touch screens and keypads that worked in landscape mode. Speed was the next most moaned-about thing. “My brain works quicker than the OS,” was a not untypical comment. As with most software, the easier the navigation and the smoother the operation, the more endearing the application is to the user. This is something that mobile phone vendors and software developers forget at their peril.

Not surprisingly, perhaps, when asked what would make a difference to navigation and access, the same themes re-emerged from the 352 respondents: trackballs and shortcuts straight to things like flight mode or the home screen. A few people would like to be able to attach external keyboards or mice, perhaps through Bluetooth.

Looking to the future, the most wanted thing, at 31 per cent, was good internet access through a good browser. Figure 2 shows the full ranked list of requirements for the readers’ perfect mobile phone. 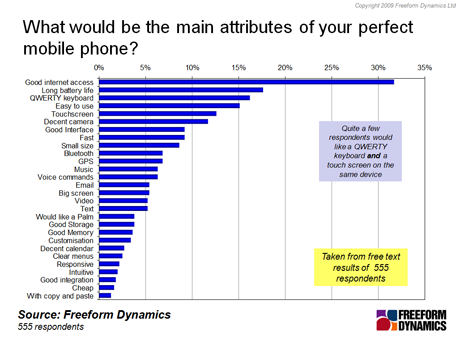 As you might expect, when considering the views of over five hundred people, some of the desires are contradictory. For example, a small size is ranked ninth, flanked by a QWERTY keyboard in third place and a large screen in 15th.

Moving to a less scientific view of the results, some readers came up with some interesting suggestions. A couple of them thought that a mobile built into a pair of spectacles would be a good wheeze. You’d get full-screen viewing but, presumably, you’d rely on voice activation. This could prove interesting in a crowded tube train or in other public places. Speaking of which, while a lot of people wanted voice activation of functions an approximately equal number wanted people to shut up.

One user was fearful that anyone could pick up her Bluetooth communications with just a radio. She’d like to see a genuinely secure phone.

Someone suggested the ability to hide functions that are never used in a traditional menu. Others complained bitterly about the randomness of the manufacturer’s menus. One reader wondered if this was a deliberate ploy to make you hit internet connection functions by accident in order to deliver more revenue to the telcos.

And then you get the wags.

One said, “The perfect phone would cost less than $20 and be able to make calls based on the numbers I actually dialled.”

Another, rather given to shouting, said an ideal phone would, “AUTOMATICALLY turn off in movie theaters, give parents the ability to actively limit teens' ability to use the phone (or SMS) after certain hours, have the phone 'know' whether the user is attempting to drive a vehicle and ONLY work in hands-free mode or only if the car is STOPPED.”

We think this one was being serious when he said, “Need to add a biometric sensor (e.g., fingerprint or face recognition) to very quickly unlock the phone. It wastes time and distracts me to have to enter the password every time I want to use the phone.

And, finally, a heartfelt plea from John, “Imagine driving in your car with your wife and kids and you get an email from the hot chick from your office and your Bluetooth hands free speaker starts booming out. Dear John, I really liked it when you said my hair looked lovely today......”.