US Air Force boffins say they have created wireless links of similar capacity and quality to optical fibre, allowing extremely high mobile bandwidth and - perhaps - the use of quantum encryption methods without a physical connection. 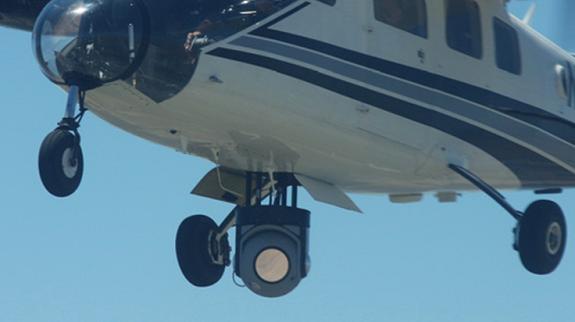 How to take fibre to a plane in flight

According to an announcement issued earlier this week by the US Air Force Office of Scientific Research, the Office's Dr David Hughes is "leading a team investigating long-distance, mobile optical links imperative for secure quantum communications capabilities".

The idea is to use a laser beam through the air to carry information optically in the same way that sending light down fibre works. In the case of fibre, it's possible to send information - for instance encryption keys - coded as individual photons, quanta of light. Any attempt to intercept such info would by definition involve changing it, meaning that any eavesdropping would surely be detected. Thus quantum methods might offer better security.

But for this to work, a very clear signal is needed. Light travelling down a fibre offers such a signal, but normally light travelling through the erratic medium of air would not.

"When you transmit information through turbulence (motion in the atmosphere caused by turbulent cells or "wind") it's distorted just like the information coming from the light reflected off a distant, twinkling star to your eye. It's fuzzy," says Hughes. "You have to overcome that by using adaptive optics to rectify the distortion and get a better quality signal."

Astronomers cheesed off by twinkly stars use adaptive optics, which measure distortion of an incoming photon stream very fast and use piezoelectric actuators to warp the shape of a telescope mirror to tolerances of one fifty-thousandth of a millimetre every millisecond. This lets the mirror produce an image approaching theoretical perfect performance - the sort of performance you need to start dealing in in quanta/photons.

Hughes and his fellow air force boffins report that they have used lasers with adaptive optics to set up 35-km long laser links "without distortions" in "both stationary and flight situations".

"It wouldn't take much to apply the technology to operational aircraft for the Air Force," says Hughes.

Apart from the possibility of quantum crypto methods, distortion-free laser links would offer very high bandwidth just as fibres do - which might be at least as useful as exotic security methods. This is especially true given the massive bandwidth hunger and spectrum overcrowding seen in modern wars - and, increasingly, modern cities.

The Air Force statement can be read here. ®