Updated The following story was based upon a mistaken assumption that the censorship as described was due to a Turkish governmental directive. That assumption was incorrect. The blockage of the pages discussed was instead merely instituted at a local level - in our reporter's case, through hotel-hosted web access. The Reg page as described below was - and remains - generally accessible throughout Turkey. The Reg regrets the error.

Memo to Reg commentards: You may suffer under the heavy hand of the Moderatrix - but at least you don't live in Turkey.

If you did, you wouldn't even have the freedom to read the comments appended to a run-of-the-mill Reg report about a middle-aged man posing as a lesbian in an effort to land photos of nude girls.

In the land of İznik tiles, the Ayasofya, and İskender kebabs, if you attempt to access the comment page in question - which contains Reg-reader responses to the article "Man posed as teen lesbian to snare girl's nude photos" - you're greeted not with finely honed commentary by Reg commentards, but instead with the following page, seen here as displayed by the iPhone's Safari browser: 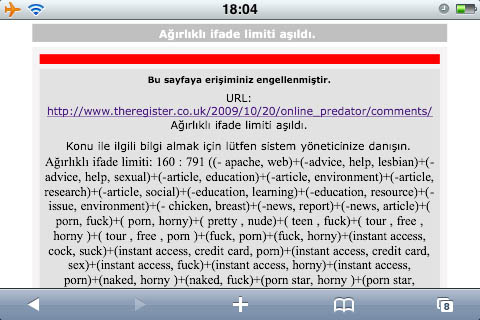 To be sure, The Reg isn't being singled out for such nanny treatment. Your intrepid Türkiye-trotting reporter took it upon himself to investigate a broad range of tawdry US-accessible websites, only to discover that they were all similarly blocked - although, strangely enough, searches of Google Images turned up a full complement of digitized nastiness.

Turkey has long taken a paternalistic attitude toward web content. Take, for example, its repeated blockings of YouTube for that site's posting of content that Turkish censors and courts deemed insulting to either the Turkish state or its enforcedly beloved founder, Mustafa Kemal Atatürk.

A Turkish court banned then quickly unbanned YouTube in March of 2007, only to re-ban it in September of that year. YouTube was again banned in early 2008. Another banning in May of that year celebrated its first anniversary in May of 2009.

YouTube hasn't been Turkey's only target. Atheism proponent Richard Dawkins has seen his website investigated and then blocked - although that action may have been more political than puritanical - and a Facebook presentation app, Slide, was also digitally blue-penciled.

It's important to note that many Turks are themselves unhappy with their government's heavy-handedness - so much so that Turkish bloggers have mounted an organized protest effort.

But challenges to the Turkish government's web censorship have as of yet come to naught. And with Turkey's efforts to join the EU now on the back burner, we expect no governmental moves to mollify web freedom-seekers. Or for that matter, web libertines.

The Reg to Ankara: block YouTube and others if you must, but when you mess with our readers' right to self-expression, you risk inciting the wrath of Vulture Central. ®