Review Ubuntu 9.10 - aka Karmic Koala - is taking the fight to Microsoft and its new Windows 7 operating system.

The Koala - due for its official release today - brings faster boot times, a revamped software installer, better disk encryption, online services, and quite a bit more to the popular Linux desktop.

We took the release candidate for a spin and are happy to report that while work remains, Ubuntu 9.10 has plenty of improvements and that it's well worth upgrading your current system.

For long-time Ubuntu fans, the most immediately noticeable change in Karmic Koala will likely be the new Software Center, the graphical utility for package management which replaces the traditional GNOME Add/Remove tool.

As it stands with the 9.10 release Software Center doesn't really do anything Add/Remove didn't, but the interface is considerably cleaner and will likely be easier for Linux newbies to navigate.

More interesting is where Canonical plans to go with Software Center in future releases. The goal is to eventually replace Synaptic, gdebi, some parts of the Computer Janitor, and possibly the Update Manager as well, with the all-in-one Software Center. Ubuntu also plans to offer commercial software through Software Center, though that won't likely happen until version 3.0 - currently Software Center is a 1.0 release. 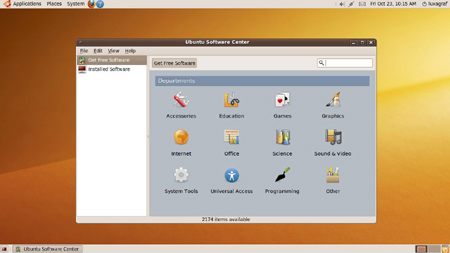 While Software Center looks great as is, and Canonical's plans call for an even brighter future, at the moment Software Center is essentially a prettier version of the familiar old Add/Remove.

Another bright spot in Karmic Koala is significantly faster boot times. This is an issue that goes beyond Ubuntu, with Microsoft making much of the improvements in Windows to make its latest operating system - Widows 7 - start faster than Windows Vista.

Ubuntu founder Mark Shuttleworth has been looking forward to a scrap with Windows 7 on netbooks and, earlier this year, his company Canonical announced plans to optimize Ubuntu's boot performance. The goal being to get the system up and running much faster.

Unfortunately, you won't get to enjoy the fruits in Karmic Koala, but the eventual goal is to deliver 10-second startups by the time Ubuntu 10.04 is released in 2010.

The boot time tests for the final release of Ubuntu 9.10 mirrored our earlier experience with the beta release - the average startup time was 26 seconds, with the Xorg starting around the 15-second mark.

The times are a little disappointing given that the eventual goal is ten seconds. But of course it's worth asking how often the average user actually boots up Ubuntu. Given its stability, most Linux users tend to just leave the system running indefinitely, making the faster boot time of dubious benefit.

Perhaps the most common use case for faster boot times are netbooks, where Solid-State hard drives are becoming increasingly common. Netbooks are an area Microsoft hopes Windows 7 will do well, compared to Windows Vista. Given that SSDs boot faster anyway, coupling them with Ubuntu's boot optimizations will likely make for some very fast boot times.

Under the hood of Ubuntu 9.10 there are some nice improvements including GRUB2, which is now the default bootloader, along with an improved AppArmor and disk encryption utilities.

Ubuntu has included the AppArmor enhanced access control framework ever since the 7.10 release. However, Ubuntu has never surfaced or promoted AppArmor as much as other distros like Fedora. That continues with Karmic Koala where, for example, there's a new Firefox sandbox policy, but it's disabled by default.

Still, AppArmor does get some love in Karmic Koala with new support for cache files. AppArmor gives you more access control to grant or deny system privileges on a much more granular level than is possible with Linux's default access scheme. The new cache element means that AppArmor is a bit faster to initialize on boot.

Also on the security front is a much improved disk encryption tool. Ubuntu has had block-level encryption for some time, but did not include the option on the LiveCD. More granular encryption arrived in Ubuntu 9.04, which allowed users to encrypt their entire home directory, but the option still wasn't part of the LiveCD installer.

However, this time around, the Ubuntu LiveCD installer will offer the option to encrypt your home directory - also configuring the swap partition for encryption.

Which flavors are the lightest and the heaviest disk and memory-wise?
OSes18 Aug 2022 | 26