There's little appetite for a music tax on ISPs to compensate rights holders - only 3 per cent of non-infringers support the idea, and only 5 per cent of all adults polled.

The report confirms growing awareness of Rapidshare, and the high prominence of Google could either indicate brand familiarity, or the popularity of casual "grab an mp3" music consumption.

"It would be interesting to see what kind of effect there would have been if people had been fined £30 for file sharing, rather than the seemingly disproportionate punishments pursued by the music business."

A couple of interesting price points emerge from the research. The revenue-maximising price for individual downloads should be 45p, but only a fiver a month for an unlimited download service. This is considerably lower than earlier research where people offered unprompted responses for how much they would pay for legal P2P. The figure has never been revealed, but is believed to be considerably higher than a fiver. And that's voluntary. 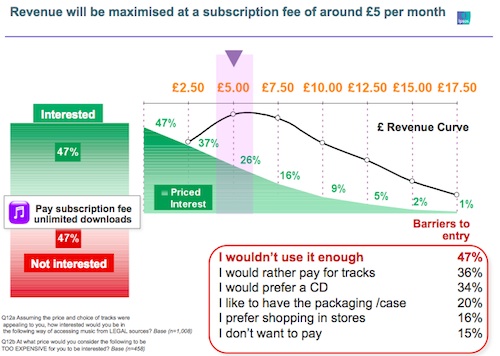 How much would you pay for a monthly unlimited service? [click to enlarge]

It's like asking "How hard would you kick the beggar? a) quite hard b) not very hard c) a little".

It once again suggests that the music business is leaving money on the table by refusing to license P2P services. And that money is picked up by rival entertainment industries. ®