Life as we know it on Earth is mostly ugly, sometimes monstrous, and to a statistically small but nevertheless disquieting magnitude, it's composed of wandering packs of ravaging blood-thirsty wolves. Curiously, this beastly menagerie comes from what is essentially the same biological recipe that also spawned Academy Award-winning actress and unquestionably classy dame Joan Crawford.

As for life on other planets, it's probably all tentacles, teeth and oogly bits best left unimagined. Yet some folks like John Baross, an esteemed astrobiologist and oceanographer from the University of Washington, feel a need to turn over this theoretical stone to have themselves a peek. NASA's Astrobiology Institute at the Ames Research Center and the Lockheed Martin Corporation gave Baross a public forum to do so Monday night in Mountain View, California, in honor of the 150th anniversary of the publication of Charles Darwin's "On the Origin of Species."

Darwin, of course, is the fellow who proposed a revolutionary theory about how life evolved from common ancestors after he took a five-year boating tour in the tropics pestering the finches. Baross and others in his field think the same Earthly processes described by Darwin's 1859 best-seller is our best tool to hypothesize where life may exist on distant planetary bodies. 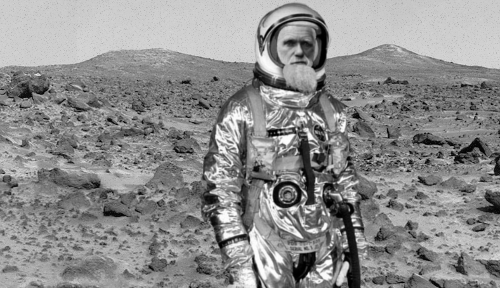 Astrobiology itself is a field of optimism, observes Baross. But with NASA's Kepler mission primed to snoop for Earth-like planets outside our solar system, it's a particularly encouraging time for the biz.

"I predict in the next five to ten years, we will make discoveries that will lead to theories and ideas at least as profound as Darwin's," said Baross.

The hunt for life on other planets begins with using Earth as a model — which can be bothersome because we don't have a complete grasp of the requirements right here. But everything we've studied thus far, does have certain characteristics and requirements: water, a light- or chemical-based energy source, and a carbon-based metabolism. While advances in biology and biochemistry may indicate even these requirements aren't set in stone, it's a good place to start.

Evidence points to the very first photosynthetic organisms using hydrogen as their primary energy source, said Baross. That's primarily because hydrothermal systems that would have been very prevalent in the early Earth produced huge amounts of hydrogen for life to take advantage of.

"Hydrothermal systems are generally the result of plate tectonics," said Baross. "I think tectonically active planets are what we want to look for in the universe.

"To keep tectonically active — as we know it — is going to require water, it produces the needed chemicals for life, and creates the geochemical and geophysical conditions necessary for the origin of life in my hypothesis," he continued. "Without the kinds of elements and minerals that are created by tectonically active planets I don't think it will have the menu to create life."

So are there any planets in our own galaxy that are tectonically active (present company excluded)? Baross points to photographs of Mars that indicate the surface has extensive faults. There's also evidence of the activity from magnetic stripes in the ancient crust. But if the planet once was tectonically active in it's early stages, it doesn't seem to be now.

"If we're looking for carbon-based life, a planet must first acquire it and be able to maintain it," said Baross. In order for a planetary body to create life, it's going to need the proper chemical menu to even have a shot.

But a planet could also skip a step and acquire life from somewhere else. What's needed then for known carbon-based lifeforms is liquid water, energy sources, and at least 30 particular elements for the required chemistry inside us.

Certainly not an impossible feat and that's just for lifeforms humanity has cataloged in our little planet. Life could be a lot more freaky than we can imagine.

"I'd like to point out there are many different ways for non-Earth-like life to not use light or chemical energy but use some other form like radiation energy, wave energy, or ultraviolet energy," said Baross.

As of October, there have been 403 planets found outside our solar system. Most are massive gas giants like Jupiter and Saturn, but we've only begun the search.

"I think all of us really believe that rocky planets like Earth are going to be found at some point," said Baross.

But Baross also believes environmental conditions on Earth are likely to represent all the conditions that support carbon-based life.

"To growing in an organic solvent rather than liquid water on the moon, Titan, or to grow at temperatures of minus 100 degrees Celsius — there are a lot of ways to think of this because those conditions exist on other planetary bodies," said Baross. "Part of looking for the limits of carbon-based life now is studying models of what conditions occur on different planets and moons that are outside the limits of what we find on Earth." ®