We tested the Kingston drive on an Intel Core i7 870 system and saw these figures were accurately reflected when we ran HD Tach 3 and CrystalDiskMark 2.2 benchmarks. The time taken to copy a 2GB folder of files within the 40GB SSD was many times slower than the 80GB and 160GB Intel X25-M drives. 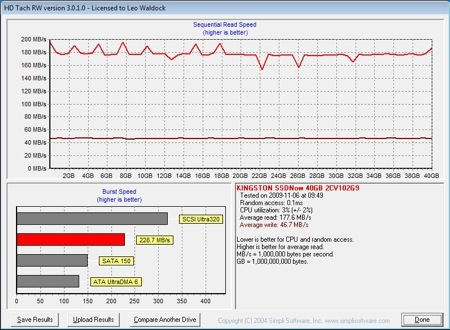 The important point is that Kingston delivers on read performance and that’s exactly what you need when you’re starting Windows or loading an application off the disk and into memory.

The matter of the 40GB capacity is somewhat vexed. You need to allow 20GB for an installation of Windows 7 so you’ll have to work damn hard to get your boot drive down to 40GB unless you’re happy installing applications to a secondary drive. Provided you can handle the discipline of uninstalling unwanted application and games, we predict that the Kingston will make massive inroads into the desktop market.

But what we really want is a cheap 80GB SSD as that would make life much easier.

Kingston has delivered a disguised Intel X25-M that will transform your PC for a trivial amount of cash. ®

Your 60-second guide to what Intel announced at CES. Or in 5 seconds: New laptop chips

CES And some desktop parts, from 14nm and eight cores to 10nm and four cores

Updated Why do most PCs not support error-correcting code? Chipzilla is to blame, says Linux don