Review At first glance, you could be forgiven for thinking we were re-running a review from last year - we originally put the Archos 5 through its paces in October 2008. The addition of two extra words to the end of the name may not sound that exciting initially, but while the Archos 5 Internet Tablet may look very similar to its predecessor there is one very significant change: it now runs Google Android. 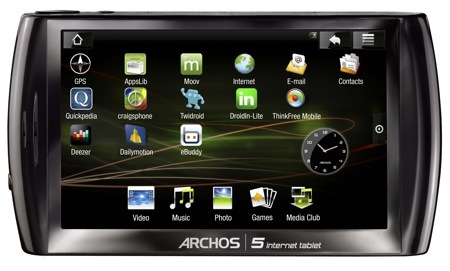 Gone is Archos' own - not exactly super swish - Linux-based OS and in its place sits Google's Linux-based mobile operating system, the first time that it's been seen in an official capacity on a shipping product that's not a phone.

However, it's probably worth getting this out of the way early on: not all Android devices are created equal. Yes, Android is an open source operating system that any manufacturer can download and install onto its hardware without paying a fee. However, don't expect it come with all the applications you're accustomed to seeing on phones from the likes of HTC, for example. Specifically, you won't find Google's suit of apps on there by default since Google doesn't give those away for free.

So, while you will find the core Android functionality, you won't find the apps that make up what's termed the Android Google Experience - which means no Gmail, YouTube, Google Maps, Calendar and Google Talk.

Perhaps the app you'll miss most, though, is Android Market, Google's equivalent to Apple's App Store. Archos has strung its own version together called AppsLib, which promises to showcase free and paid software developed specifically for the Archos 5's larger screen, but it has nowhere near as many apps as the official Google phone-centric offering. 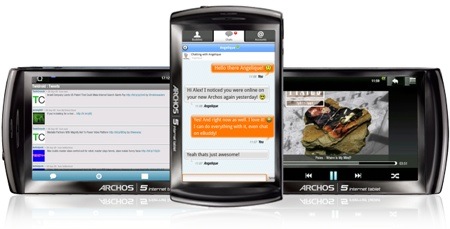 You can also go down the DIY install route for some apps. Point the browser at m.spotify.com, for example, and you can manually set up Spotify by selecting one of the HTC versions and then clicking the link labelled "manually download the application". A slick experience, however, it is not.