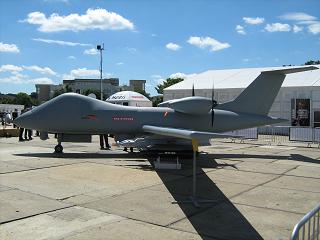 “This achievement is testament to the can-do approach of the whole team working on this programme," said BAE killdroid honcho Chris Allam. "It confirms the skill and innovation within the UK aerospace sector.”

The current Mantis is a technology demonstrator jointly funded by the UK Ministry of Defence (MoD) and British aerospace firms. The MoD has thus far refused to divulge details of project costs on the grounds that they are "commercially sensitive", while BAE has stated that the MoD has requested the secrecy.

The 20m-wingspan Mantis, should it be put into production, would be in the same general class as the existing "Predator-B", aka the "Reaper", which is already in service with the RAF. It would carry the same weapons - laser guided antitank missiles or smartbombs - and similar sensors. Mantis is said to be somewhat bigger, however, and to be able to fly at 55,000 feet as opposed to the Reaper's 50,000.

New special sauces claimed by BAE for the Mantis include onboard processing of sensor information, which could save significant quantities of bandwidth, and largely-autonomous flight controls which would save on expensive pilots sitting in remote control stations.

Both technologies are already available in other machines, however. The latest Predators, produced for the US Army and so unaffected by the US air force's insistence on using fully-qualified human pilots as much as possible, are operated by comparatively cheap tech specialists just as Mantis would be. Onboard processing of data-heavy sensor output is already routine in much more basic aircraft. And far from being at the cutting edge of drone tech, Mantis is already being eclipsed by such recent offerings as the Avenger.

There can be little doubt that if the British forces purchase Mantis, they will pay more for a given level of capability than they would if they continued to buy Predators or other foreign-made products.

Should Labour be re-elected next year it would seem very likely that the RAF will be ordered to buy Mantis nonetheless, as Lord Drayson - one of the British arms industry's staunchest friends in government - has lately returned to the MoD with an anomalous portfolio which makes him effectively equal in rank to the Secretary of State for Defence.

However a decision on whether or not to discard Reaper and switch to Mantis appears unlikely before the UK's strategic defence review next year, which all parties have agreed should follow the election.

Rival drone makers have hinted that the UK MoD - known to be strapped for cash - can't realistically afford to pay British industry to reinvent other people's wheels yet again.

"These trials at the end of this technology demonstration programme have helped build confidence in the feasibility of a UK-derived unmanned aerial system," he said. ®