You could run Windows, open up the D: partition on which all the Android stuff is kept, create a folder called 'Music' and place your content there. Except D: has fewer than 3GB of free space, so don't expect it to hold many tunes. It'll play MP3, Ogg and iTunes-downloaded DRM-free AACs, but not WMAs; ID3 tags and album are are supported. Android will also read SD cards and USB sticks, but surely not having to use these is what fitting a netbook with a 160GB hard drive is all about? 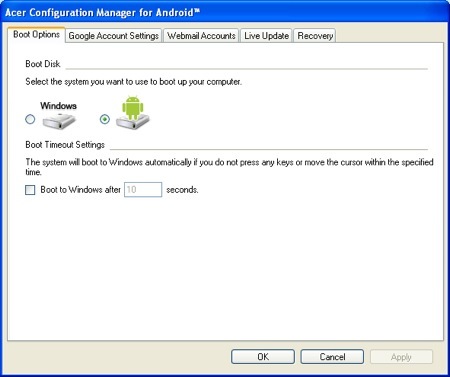 So if Android - here, at least - isn't much use for media playback, is there any value to it beyond fast (ish) internet access? Well, not when Windows XP will here resume from sleep in less time than it takes Android to boot: 14 seconds.

Keeping the machine shut down will conserve the battery charge, though. You might think Android consumes less battery power than Windows, but if it does, there's not much in it. An hour or so's tinkering with Android and the D250's 2200mAh battery charge had fallen by much the same as it would have done under Windows.

Now, don't get us wrong, we like Android. The problem is that here it's being used to a fraction of its full potential. When Acer announced this machine, we wondered if we could remove Windows altogether and just run the Google OS. As it stands, even if that's possible - you'd have to tinker with the HDD's partitions, but we think it's doable - you'd leave yourself with a very limited computing experience. You'd be better off installing Ubuntu or Moblin instead.

You'd certainly get more consistency. Among the icons you can add to the desktop are website shortcuts - but only from a pre-set selection. Firefox's bookmarks aren't listed. This is because clicking on an on-screen web shortcut fires up the Android browser, not Firefox. It has the usual Android browser zoom and pan buttons, but these don't work. Neither does Flash playback, which is presumably why Firefox has been added. So why didn't Acer and/or InSyde also ditch the touchphone-centric Android browser? 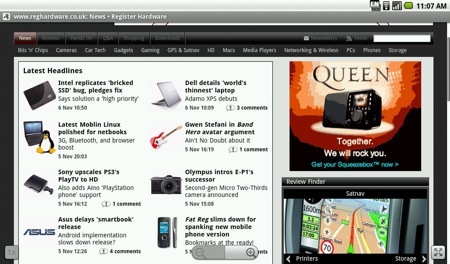 After booting up the D250 into Windows, we did get a handful of Android updates come down the line, so there's clearly a possibility that Acer and InSyde will extend the OS' functionality. As it stands, Android is really no better than any other quick-start OS, suggesting the Google OS was chosen for its brand value rather than technology strengths.