AMD has whipped out its latest top-of-the-line dual-GPU graphics card, as expected.

Dubbed the ATI Radeon HD 5970, the DirectX 11-supporting card can drive up to three displays simultaneously - there are a pair of DVI connectors and a DisplayPort on the back - and one screen at up to 7680 x 1600.

The board's two 40nm GPUs run at 725MHz with each chip's 1GB of GDDR 5 clocked to 1GHz effective and connected over a 256-bit bus.

AMD said the 5790 consumes just 42W at idle, though that leaps to 294W when the thing's cranking out texels ten to the dozen. 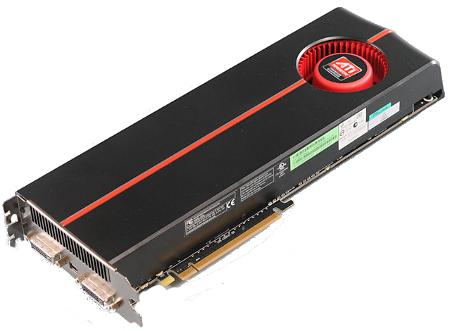 Assuming size, power and heat output of the out-of-the-box 5970 work for you, you'll probably want to try overclocking the board. AMD said the card is "designed for overclocking" with "massive overlocking headroom" thanks, in part, to a vapour cooling mechanism design to take 400W of heat output in its stride.

All the usual suspects among the graphics card vendor community are announcing 5970-based boards even as you read this. ®