Hey kid, Be a Martian

NASA is outsourcing laborious Martian cartography to Earth children with a website that entices users to make a game out of sorting through the space agency's hundreds of thousands images of the Red Planet.

In collaboration with Microsoft, NASA has created the "Be a Martian" website, where helping to improve Mars map data earns participants "points" and "badges" as well as a heady sense of aiding humanity's exploration of distant worlds without having to wipe the Funions dust off your fingers.

The website features two games that use crowdsourcing as a tool to help scientists better understand the Red Planet.

One game tasks players with lining up three images of the Martian surface taken by the 2001 Mars Odyssey orbiter against a larger background image from the Mars Global Surveyor orbiter (operational from 1996-2006) that measures elevation. Using the background as a guide, users nudge the smaller images into place until the surface features line up precisely. NASA said the process game will help scientists create more accurate 3D models of the planet. (This game can prove quite difficult when the images provided lack distinctive features). 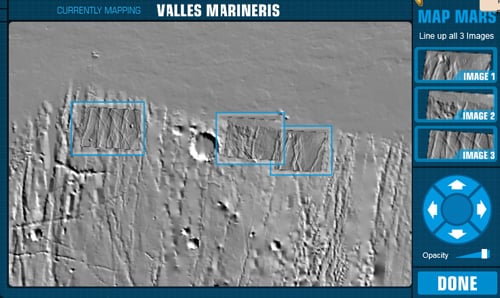 The second game available is counting Red Planet pock marks. With a single Mars Odyssey mission snapshot, users place and resize a circle tool around Martian crater outlines. NASA hopes to use this data to help figure out the relative ages of small areas around Mars and notes the information may be important to discovering when or whether Mars was once habitable.

The website is built on Microsoft's Windows Azure platform and its new "Dallas" service unveiled at the company's Professional Developers' Conference (PDC) today in Los Angeles.

Of course, any computer game needs a bit of inducement to make it not seem like so much repetitive labor. NASA rewards players with 100 reputation "points" per completed task and a collection of "badges" for advanced participation. It's more of a personal score, really, as they don't manifest into anything other than satisfaction of being a standup sort willing to donate your personal* time to Mars science.

Both companies hope the website will inspire youngsters to grow up to be part of their payroll.

"Industry leaders like NASA and Microsoft have a social responsibility as well as a vested interest in advancing science and technology education," said Walid Abu-Hadba, veep of Microsoft's Developer and Platform Evangelism Group in a statement. "We are excited to be working with NASA to provide new opportunities to engage with Mars mission data, and to help spark interest and excitement among the next generation of scientists and technologists."

(Plus having better Mars maps could be a terrific F-you to Google. But children are great too, we're sure). ®