Decent upgrade gets out of shape

Review Office is in a curious competitive position. On the desktop, Office is untouchable - even the free OpenOffice.org has done little to shift its hold, especially in business.

Microsoft should worry though about competing online document authoring and collaboration tools, especially those from Google. They lack features now, but compensate by offering zero install and excellent integration with other web services. As they improve, some users will ask whether they need a bloated desktop suite at all.

This gives Office 2010 a dual challenge: first, to persuade users that the upgrade from Office 2007 or earlier is worth it and second, to convince them that its technical model is still right. That said, Office is also reaching for the cloud, mainly in conjunction with the SharePoint collaboration server. The best of both worlds, or an awkward hybrid?

The second Office 2010 beta has officially been released and the reviewer's guide lists nearly 200 new features, plus a newcomer to the suite, SharePoint Workspace 2010. Here is what you need to know. First, Office now has a 64-bit option, which is welcome now that 64-bit Windows is mainstream, though unlikely to have the same impact as did the move to 32-bit way back when.

Second, Office 2010 refines the more annoying features of Office 2007, which introduced a new ribbon-based interface that continues to frustrate some users. In Office 2010 the ribbon is customizable, via an ugly but effective Customize Ribbon dialog. Microsoft has also renamed the Office button, which confuses new users, and this is now simply labeled File.

Clicking File opens the Backstage view, which occupies the entire application window with options including saving, opening, printing, setting permissions, sharing, and starting new documents. This works for print, showing an instant preview panel, but is overkill for simple functions like Save. Users will find it easily, which is Microsoft's main goal here. 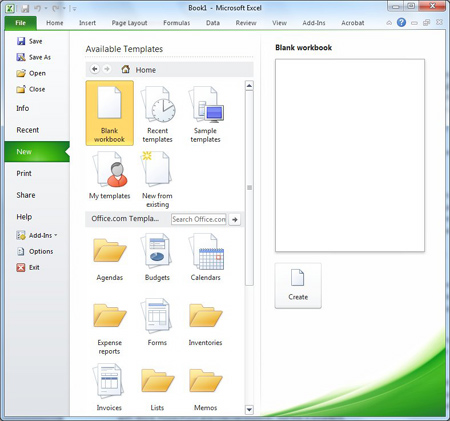 Several features run across multiple applications, including Text Effects for decorated text within a document without the need for Word Art embedded objects, though Word Art is still needed for some effects, and new tools for embedded video and images.

OneNote is greatly improved. You can now dock a OneNote window to the side of the screen and use it to take notes on documents you are reading. The link is preserved, so that when you click on a note later, you can open the document and position to which it relates. Unfortunately it only works with Word, PowerPoint and Internet Explorer, but this is excellent.