Astronomers have taken time-lapse images of a "Vampire Star" that is causing them to excitedly quiver about possible insights into the Universe's expansion.

Using the imaginatively-named Very Large Telescope and "adaptive-optics techniques", scientists at the European Southern Observatory (ESO) were able to take images and factor out the blur of the Earth's atmosphere. This technique allowed them to take pictures that are "as sharp as if taken from space", thus allowing them to take photos in great detail and reduce their carbon-footprint.

The "Vampire Star" is in fact a binary star system in which one star leeches matter from the other. The binary star system that has caused such excitement at ESO is V445 in the constellation Puppis. As eloquently written by press officer Dr Henri Boffin (really) in an ESO release, V445 "underwent an outburst after gulping down part of its companion’s matter".

The outburst was merely a nova, rather than the louder and better publicised supernova. It is the potential that the V445 system may lead to hydrogen free "type Ia supernovae" that is crucial, but things are not easy when it comes to spotting such systems. Patrick Woudt, lead author of the paper reporting the results, makes it simple to understand.

"One of the major problems in modern astrophysics is the fact that we still do not know exactly what kinds of stellar system explode as a Type Ia supernova," said Woudt. "As these supernovae play a crucial role in showing that the Universe’s expansion is currently accelerating, pushed by a mysterious dark energy, it is rather embarrassing."

What has got the scientists so exercised about this particular nova is that it has come from a white dwarf. White dwarfs come from stars such as our own sun that have come to the end of their lives and have burned off all their hydrogen. So the V445 could be the type of system that leads to a Type Ia supernova and spares their blushes.

If this hydrogen lacking system were to go supernova then it could be used to understand the role of dark energy. The existence of Dark energy is a requirement if theories surrounding the shape and expansion of the Universe are to be proved correct. 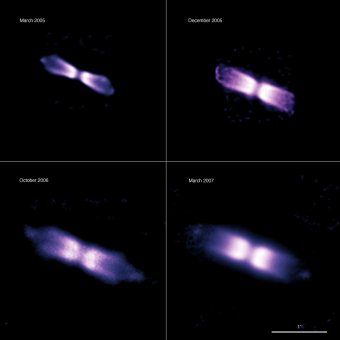 Using images taken of V445 over two years the ESO boffins were able to:

determine the distance of the system — about 25 000 light-years from the Sun — and its intrinsic brightness — over 10 000 times brighter than the Sun. This implies that the vampire white dwarf in this system has a high mass that is near its fatal limit and is still simultaneously being fed by its companion at a high rate.

“Whether V445 Puppis will eventually explode as a supernova, or if the current nova outburst has pre-empted that pathway by ejecting too much matter back into space is still unclear,” says Woudt. “But we have here a pretty good suspect for a future Type Ia supernova!”

So if the the cosmic Vampire were to go bang then they have the data needed to gain insights into a Universe that is being driven by dark energy. Or the current outburst could make the whole thing a giant celestial damp squib. ®

Move over exoplanets, exomoons are the next big thing

Is that an extremely large moon we see outside the solar system, astro-boffins ask themselves
Science17 Jan 2022 | 23