Blighty’s winter mornings can get rather cold, so if you insist on taking pictures of frozen flowers and iced-up lakes then at least Casio is here to help with a super-slim “freezeproof” compact camera. 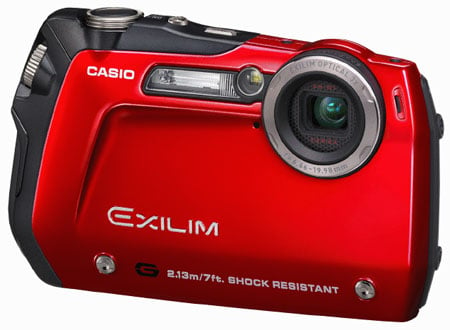 The Casio EX-G1 will apparently still snap stills in temperatures as low as -10°C, a feature that’s mainly due to the camera’s “two-layer construction” comprising a stainless steel outer body and a waterproof inner layer.

This construction also means that the EX-G1 is shock-resistant – during Casio’s test the camera survived drops of up to 2.1m – and waterproof down to depths of around 3m.

But these handy Ray Mears-esque survival features don’t mean that the EX-G1’s as bulky as a digital SLR. No, the camera is apparently the world’s slimmest shock-resistant compact camera with a profile of just 19.9mm – excluding protruding parts.

As for its photographic qualities, the Casio compact incorporates a 12.1Mp image sensor and 3x optical zoom lens. The 2.5in LCD screen may sound a little pokey, but Casio promised us that the display is tougher than a normal compact’s screen.

All the usual shooting features are included on the camera, including interval shooting – such as 10, 30 and 60 seconds – and pre-set snapping modes, including “snow” and “beach”.