While simultaneously shooting rockets out of the air

Military boffins in the US are now equipping a small fleet of armoured lorries with automatic defensive weapons which can detect incoming antitank rockets and shoot them down in mid-air before they strike, meanwhile retaliating upon the enemy gunmen with devastating firepower - all without human input. 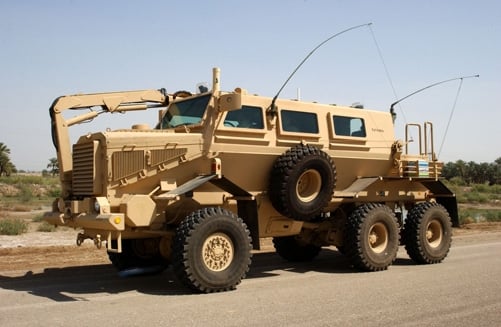 Don't shoot it, you'll only make it mad.

The new and aggressive robotic defense array is called Counter Rocket-Propelled Grenade and Shooter System with Highly Accurate Immediate Responses, or CROSSHAIRS for short. Mustang Technology Group of Texas has just been awarded an $8m contract to fit the kit - plus "Iron Curtain" active protection - to 25 Mine Resistant Ambush Protected (MRAP) vehicles for "testing and evaluation".

An MRAP, in US Army terms, is a light tactical vehicle - but to anyone else it seems pretty hefty. MRAPs, depending on exact model, can weigh in at more than 20 tons and feature heavy armour protection, especially underneath to resist the effects of mine explosions. The big vehicles have been rushed into service during recent years in an attempt to offer better protection to US troops in Iraq, frequently hit by powerful bombs.

However, MRAPS are also attacked using a variety of other means - in particular they are often shot at, making life unpleasant for "top cover" gunners manning roof-mounted weapons with head and shoulders sticking up out of a hatch. Often the vehicles are shot at not just with guns but the ubiquitous RPG* - a shoulder-fired rocket which uses a shaped charge warhead to pierce even quite thick armour.

Thus there has recently been a trend towards remotely-operated top guns, allowing the gunner to stay inside the armour. It's also routine to see vehicles fitted with "bar armour" cages, designed to frustrate RPG warheads by making them explode too soon, before contact with the main plating. Sometimes even more cunning protection is used.

But remote-operated guns fired by TV are tricky to use - it's hard, with the limited field of view offered by gun cameras, to spot the enemy and train the weapon on him. And bar armour is heavy, robbing a vehicle of performance and payload.

Enter CROSSHAIRS/Iron Curtain. Now, interlinked miniature radars will instantly detect and track any fast-moving projectile in the vicinity, pinpointing the location of the firer and swivelling the vehicle's turret guns onto target. If the incoming RPG seems likely to actually hit, the Iron Curtain system arms itself and, as the warhead comes close, a countermunition mounted on the edge of the vehicle's roof fires downward and blasts it.

The downward-angling countermunitions are meant to avoid any snags with the system inadvertently blowing away innocent bystanders or shooting up the scenery. Provided nobody is standing too close by, all should be well.

Meanwhile, even as the RPG is being blasted in midair, CROSSHAIRS - if necessary without human input - is raking the place it was fired from with a hail of fire from a .50-calibre heavy machine gun, automatic grenade launcher or whatever the MRAP has in its top mount. Trucks within a convoy will cooperate automatically using a digital network, sharing out targets and hopefully avoiding any unfortunate friendly-fire accidents. It's possible to have a human check first before the trucks cut loose, but not necessary.

"Threat identification and localization will be accomplished in sufficient time to enable both automatic and man-in-the-loop responses," say the boffins responsible for CROSSHAIRS.

Given that we're talking here about an array of automated weaponry able to pick a speeding rocket out of the air while simultaneously shooting dead the person who fired it, the identity of the agency behind CROSSHAIRS will not surprise many regular readers. It is of course DARPA, the leather-clad motorcycling lone wolf your mother forbids you to have anything to do with of the metaphorical boffinry-bureau-boyfriend community.

We look forward to the trials, hopefully to be held somewhere fairly remote, with interest. ®