Acer appears to have found a solution to notebook users' battery life woes. Its Aspire Timeline 1810TZ apparently delivers a 10x improvement in runtime when compared to other thin'n'light laptops equipped with six-cell lithium-ion batteries.

After five hours' usage at a day-long conference the other day, we thought we'd check on how well the Windows 7-based machine would continue to run. We were staggered to that, despite using up almost 60 per cent of the notebook's charge, we still had a whopping 66 hours left to go. 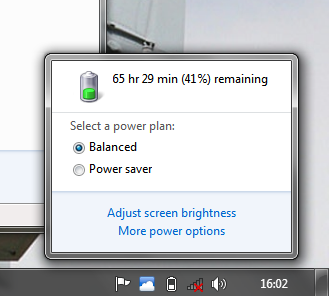 On that basis, we calculate that the 65.5 hours runtime from a 41 per cent charge means that, when topped up, the battery would drive the 1810TZ for 159 hours 45 minutes.

Or just over six-and-a-half days, if you prefer.

Given most laptops struggle to deliver six-and-a-half hours of battery life, we think we're onto a good thing here.

Then again, it might just be a Windows 7 bug.