iPhone conquers half the (smartphone) world

But there's an Android approaching

Apple's iPhone now accounts for 50 per cent of worldwide smartphone usage, according to a new report. But off in the distance, there's an Android approaching.

The latest traffic figures (PDF) from AdMob - the mobile ad-servicing shop recently acquired by Google - are less kind to Symbian and Palm. According to the report, Symbian's market share is nose-diving, and after a recent flirtation with growth, Palm's share is down as well.

The AdMob report - the latest installment in its ongoing Mobile Metrics series - must be taken with the requisite grains of salt, however. As the company freely acknowledges, the report is based upon data that AdMob acquires from its own ad-serving network. It "does not represent the traditional view of market share based on the number of handsets sold."

Still, information taken from billions of ad placements on 15,000 mobile Web sites plus iPhone and Android apps can provide insight into overall trends in the mobile marketplace.

Taken as a whole, the trends are clear. First, in the category of "tremendous grasp of the obvious", is the fact that smartphone usage is growing rapidly. A comparison of data taken from AdMob's Mobile Metric reports since early 2008 shows that worldwide smartphone usage has doubled from 22 per cent of handsets to 44 per cent: 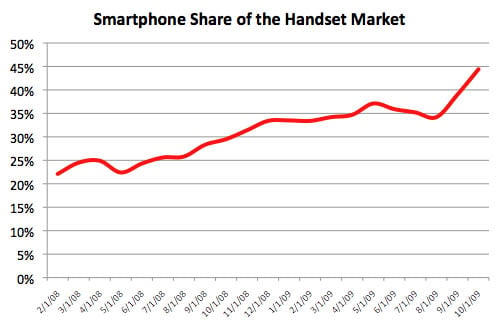 More interesting are the trends in smartphone operating systems. Early last year, AdMob's data showed that Symbian-based smartphones held a commanding lead over any and all competition. Since then, however, the iPhone has crushed not only the Symbian OS, but other competitors as well.

Two data series stand out in AdMob's analysis. First, Palm's offerings (in the chart below, a combination of Palm OS and webOS) steadily sank until webOS was released on the Prē earlier this year - but the company's numbers have again begun to slide.

Second is the rapid rise of Android, which began taking off in late spring. AdMob reports that Android requests have risen by nearly a factor of six since April. Android phones have now out-polled formerly healthy RIM to take third place behind Apple and Symbian. A distant third, to be sure, but a bronze medal still gets you onto the winners' podium. 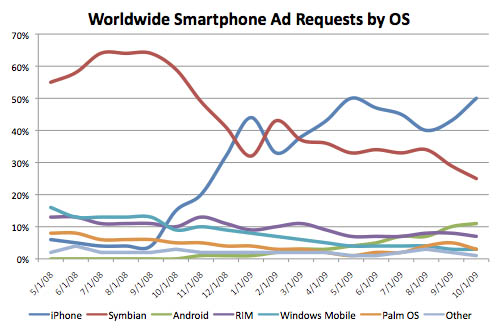 But although the slope of RIM's trend line is negative, AdMob suggests that a BlackBerry resurgence is underway. Although the company's share numbers may be slipping, the raw number of ad requests is growing. "Worldwide requests from RIM devices increased 44 per cent over the last six months in the AdMob network," the report, well, reports.

AdMob - which also tracks ad requests by individual handsets - says the recently launched RIM Tour and new the versions of the Curve (8900 and 8520) are "gaining traction."

Interestingly, the BlackBerries that AdMob suggests you keep your eye on are keyboard-equipped and not iPhone imitators like the less-successful Storm, which AdMob's data indicates holds a 12 per cent share of the worldwide BlackBerry market. The healthiest BlackBerry remains the 8300 Curve, which has garnered about 45 per cent of the RIM share for the past six months.

It's also apparent that there has been an ongoing shakeout of smartphone competitors, with less-successful companies watching their share shrink drastically or disappear entirely. A look at AdMob data based on handset manufacturers and not operating systems shows that the share held by "other" has dropped to a quarter of what it was in the beginning of 2008. 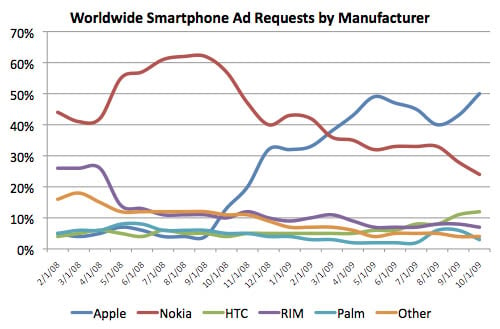 It's a tough time to be an other - or Palm

The smartphone market is maturing, and to break into it will now take a player with not only deep pockets but also nerves of steel. And having an OS partner as determined as Google won't hurt. ®