Imation notebook flash upgrade as easy as pi to 30 places

You now have the option of pepping up your sorry notebook by using an Imation solid state drive (SSD) upgrade kit, but only if you are happy getting inside its casing and swapping out its hard drive for the SSD.

The aim is to replace the HDD with an Imation M-Class 2.5-inch SSD, with either 64G or 128GB capacity. The upgrade kit, with prices for SSD plus the kit starting from around $300, comes with cables and Acronis TruImage HD software that can clone the HDD's data onto the SSD, obviating the need to re-install the notebook's operating system, applications and data. 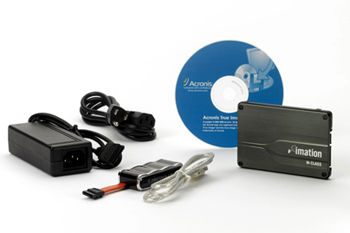 Imation says this is as easy as 1-2-3, but the actual procedure is chock full of caveats. First of all, you have to be content and competent with the idea of opening up your notebook, voiding its warranty, and unfixing and uncabling the hard drive, fixing and cabling the SSD, and possibly altering BIOS settings.

Assuming this is the case, here is what Imation says you have to do.

First you hook up the SSD to the notebook HDD and copy the files over to the SSD using the Acronis software. That means you have to open up the notebook and locate the HDD inside it. The average notebook user guide will not tell you how to do this and you'll need the basic notebook knowledge of a service technician here. Assuming you have this, then disconnect the power cable and open up the notebook.

Hook up the SSD to the system using a secondary SATA cable or a USB-to-SATA connector cable included in the upgrade kit. Reconnect the main power and then boot from the Acronis disk imaging software CD. Follow the on-screen instructions to copy all data from the existing drive to the SSD, selecting Clone Disk from the options presented by TruImage HD.

If the HDD is bigger than the SSD you will probably have to get into partitioning. There is a useful review of the swap procedure here which tells you more.

When that is done, you take out the notebook's HDD and put the SSD in its drive bay/tray or another empty one. Here's where it gets fiddly, with Imation saying: "secure it with screws from the sides or the bottom. The screws that are used to install the SSD should be no longer than 3.8mm. Note: specific details for mounting your drive may vary by system. Consult your computer owner’s manual for details."

Obviously the average notebook owner's user guide says as much about the HDD fixing screws as it does about sunspots, Lynx deodorant and the man in the moon.

If you get past this step, then you connect a PATA or SATA interface cable from the SSD to the motherboard and ditto a power cable. Imation says: "Make sure the direction of the interface and power cables are correct. Otherwise damage to the drive or cables may occur."

Now you may have to muck around with BIOS settings to get the notebook to recognise the SSD. Imation's notes say:

A: Turn on the computer and enter into BIOS setup screen during the start-up.

B: On the BIOS setup screen, select proper options for SATA, PATA, or SATA/PATA combination. Also set any optional RAID configuration items depending on desired setup and number of drives. AHCI mode should not be enabled for SSD drives.

C: Within the BIOS setup, select the proper drive for booting and then save the BIOS and restart the computer.

A neat extra is that the removed HDD can be put into a supplied case and turned into an external hard drive so its storage capacity isn't wasted.

Imation says its M-Class SSDs have great wear-levelling capabilities, terrific error-handling and have sequential read and write performance of up to 230MB/sec and 170MB/sec, respectively. In other words your flash-equipped notebook should boot in seconds and zip along like a greyhound on steroids.

If you have the $300-400 needed for the Imation kit, it may be worth paying your local PC repair shop to do the SSD-HDD swap process for you, if you haven't got the skills and information required. The review mentioned above found alternative SSDs are faster than Imation's M-Class. You might consider buying the upgrade kit on its own, starting at $194.99 and use an Intel X25 SSD instead. ®