NASA intends to build a robot rocketplane the size of a light aircraft and send it across space to fly the skies of Mars: and the space agency wants help in building it. 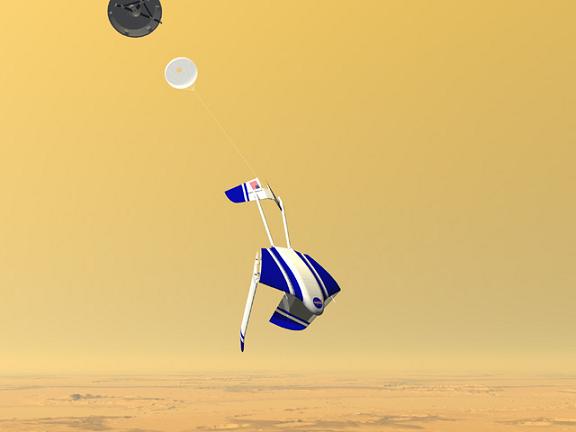 Not quite so impressed with our tripod walker machines now, are we?

The droid aeroplane is known, slightly confusingly, as ARES (Aerial Regional-scale Environmental Surveyor), the same moniker as NASA's proposed new generation of launch rockets. But this ARES is different.

It would be launched from Earth - probably atop a Delta II rocket stack - and fly to Mars packaged in an "aeroshell" re-entry capsule. Having entered the thin Martian atmosphere, the aeroshell would open and parachutes would drag out the folded-up aeroplane. Wings and tail would pop into place and the propulsion system (a liquid bipropellant rocket) would fire up. Meanwhile the carrier spacecraft, having dropped the aeroshell into the atmosphere, would lift into a "flyby" trajectory above the planet.

The plane would then stabilise in flight above the red planet a mile up for approximately an hour and a quarter, scanning the atmosphere and terrain over as much as 600km before running out of juice. The idea is that the ARES would give much more detailed readings than an orbiter, but cover much more ground than ground rovers can. Data would be relayed back to Earth via the carrier spacecraft.

The Mars-plane idea has been kicking around at NASA for years - it was thought at one point that that it might launch as soon as 2007, but that never happened. Last week, however, the agency issued a "teaming opportunity" in which companies or designers might lend boffins at the Langley space centre a hand.

The idea would be to put forward revised ARES Mars-plane plans for consideration as a "Discovery" mission. The Discovery missions will focus on exploration of planets in the solar system, and are intended to be relatively low cost and quick to implement.

Next page: So what exactly does NASA need help with?
Page: