By now, David de Rothschild is used to being cast as the eccentric visionary whose well-meaning crusade to save the world's oceans is overshadowed by a lack of execution - or at least naiveté.

After all, the billionaire eco-adventurer's three-year quest to sail across the Pacific in a boat made completely of recycled materials has suffered its share of setbacks. For one thing, the vessel is no longer being made solely of recycled plastics.

And for another, some doubt the 60-foot catamaran containing 12,500 2-liter reclaimed soda bottles will withstand the cruel Pacific waves during a planned 12,000-mile trek from California to Australia.

What's more, the Plastiki - as the experimental ship is to be christened - was originally set to sail some 12 months ago, a deadline that's been repeatedly extended as the ambition of de Rothschild's plan has presented obstacle after obstacle to his 30-person team. (They now hope to put the boat in the water for the first time by year's end and begin the voyage early next year).

"Everybody has written us off," de Rothschild conceded in September while speaking to The Register from the massive San Francisco pier where the vessel's skeleton was finally taking shape. "I don't think anyone will really truly understand the impact of the project probably until we've sailed and 'till many years later, when we influence a kid in school who then decides to become a marine biologist, [or] a scientist who decides to design something differently." 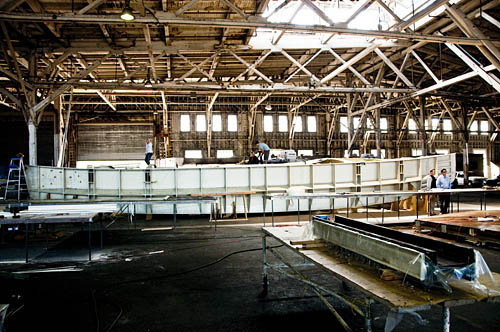