Unusually for an E series device, there’s a good range of media features, including music player, photo gallery and Nokia’s ‘Home Network’ functions, for accessing UPnP media. The camera is backed up by a photo editor, so you can make simple changes to pictures, and upload them directly to a selection of online services.

There’s an FM radio too, which uses the earpiece as an antenna, but the podcasting and Internet radio apps are absent. We added the latter easily – download the version for the 6210 Navigator – and it integrates with the main radio application. The built in speaker is mono only, and somewhat lacking in bass, but it’s clear, and fairly loud. In fact, it sounds at its best when the phone’s put down; the raised camera surround allows the rear-facing speaker to bounce its sound off the surface.

Though the camera on the E72 is 5Mp, there’s no fancy Carl Zeiss lens, as found on the N series, and the flash is a single LED. Also included is a front facing camera that allows video calls. Video capture is only 15fps, at up to VGA resolution, so it’s not aimed at more than casual capture really. As the sample photos show, it’s not as good a camera as you’d find on a more multimedia-orientated phone, but we’ve seen worse; the close-up of a leaf shows good colours, but using the zoom starts to show up the camera’s limitations.

With quad band GSM, 3G, HDSPA up to 10.2MBps, Bluetooth 2 and 802.11g with WPA, about the only connectivity option missing is infrared. You can sync over the air using SyncML to websites like Mobical.net, and Nokia’s PC Suite is supplied on the phone’s memory card. A plug-in for iSync is available on the Nokia website, and the E72 works with Multimedia Transfer and Map Loader, too, so Apple users aren’t left out in the cold.

There are, too, some quite nice little touches, that make the E72 feel polished. Flip the phone over, for example, and an incoming call will be silenced, or an alarm set to snooze. Hold down the centre of the navpad when the keypad is locked, and the screen lights up displaying the current time in large letters. A long press of the space key switches the LED flash on as a torch. 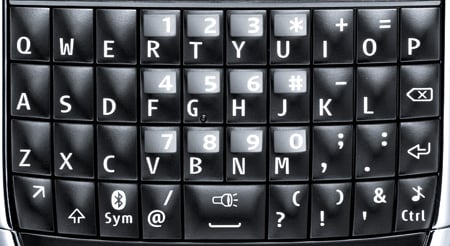 As with the E71, there’s a ‘mode’ option too, which gives you two home screens, each of which can have a different theme, different notification options and application icons, so you can switch to ‘personal’ mode at the end of the day, for example, though it’s a pity you can’t switch profiles with modes, to ignore business calls, for example. Besides the lifetime Nokia Messaging subscription, there’s walk navigation included, and 10 trial days of drive navigation as well.