Strap-on jetwing birdman does an Icarus into Straits of Gibraltar

Renowned backpack birdman Yves Rossy has suffered yet another mishap during an attempt to fly across the Straits of Gibraltar. Windy conditions were blamed by organisers after the Swiss daredevil plunged into the sea minutes after leaping from a small aircraft above Morocco, having intended to land in Spain. 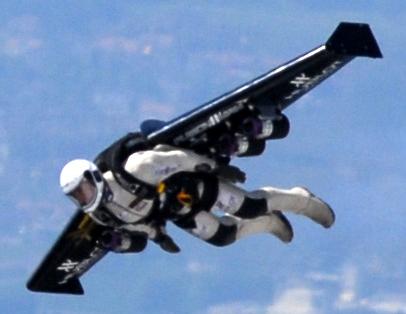 The planned flight was billed as "intercontinental" in an attempt to differentiate it from Rossy's successful flight across the English Channel just over a year ago. However the 23-mile Straits bid doesn't really seem much different - apart from the fact that it didn't work out.

It's not yet known just why Rossy did an Icarus on this occasion, though his many previous crackups have often followed losses of control. The birdman's custom-made jetwing is known to be a bit of a handful.

Over the next five years, Rossy made many daredevil test flights, mainly over the Swiss Alps, gradually eliminating flaws as successive strap-on planes went out of control or cracked up in accidents - though Rossy himself always managed to parachute down safely.

Today's wing is a rigid carbon-fibre job, extended after Rossy jumps from his drop aircraft by a gas piston. The four miniature jet engines are cased in kevlar, to prevent the dashing birdman being riddled with high-velocity debris in the event of a turbine coming to bits. A flame-proof suit is necessary to avoid burns from the hot jet exhaust.

Rossy's current backpackplane won't ever be a common transport choice. It can only be launched by leaping from a great height, and landing is strictly by parachute - a small drogue is opened first to slow down, then the main descent chute opens. In the event of a loss of control in flight, Rossy can jettison the wing - the latest model has its own chute to bring it in to a soft landing, intended to prevent the destruction which has resulted on previous occasions.

The least user-friendly thing about the jetpack is that there are no controls or instruments other than a throttle and an audible altimeter. Rossy is the only man in the world who knows how to fly it, by moving his body and head, and it's plainly quite difficult even for him.

But Rossy says he aims to develop a more useable machine, with enough thrust to make a vertical takeoff rather than jumping from a height. The current model has better than 200lb of poke, but weighs 120lb fuelled up without its pilot. It also lacks any feasible means of control at low airspeeds. Even so, the resourceful birdman reckons one day to sell backpack planes - perhaps not VTOL ones - at the same sort of prices as current microlight aircraft.

For now, though, the former Swiss airforce fighter pilot will be sticking mainly to his day job as an airline pilot. No doubt further madcap stunts may be expected. ®