Climategate: Why it matters

CRU was founded in 1972 by the 'Father of Climatology', former Met Office meteorologist Hubert Lamb. Until around 1980, solar modulation was believed to be the driving factor in climatic variation. A not unreasonable idea, you might think, since our energy (unless you live by a volcano vent) is derived from the sun. Without a better understanding of the sun, climatology may be reasonably be called "speculative meteorology".

But CRU's increasing influence, according to its own history, stemmed from politicians taking an interest. "The UK Government became a strong supporter of climate research in the mid-1980s, following a meeting between Prime Minister Mrs Thatcher and a small number of climate researchers, which included Tom Wigley, the CRU director at the time. This and other meetings eventually led to the setting up of the Hadley Centre for Climate Prediction and Research, within the Met Office," the CRU notes.

Lamb (who died in 1997), however remained sceptical of the greenhouse gas hypothesis to the end.

In addition to inheriting all the problems of climatology, the greenhouse gas hypothesis has several unique issues of its own, and addressing them is a challenge for the most scrupulous researcher. How CRU addressed them was to define climatology for two decades - and ultimately defined the public debate and policy, too.

The gas theory is based on an elegant 'energy budget' model, but it leans heavily on positive feedbacks resulting from greenhouse gases such as CO2 in order to produce the warming CO2 cannot do by itself. Yet no simple empirical laboratory tests are of use here. Nor is there a ‘fingerprint’ or tell-tale signal that anthropogenically produced gases are the primary forcing factor. Hence climatology's increasing reliance, since 1980, on a range of anecdotal evidence and computer modelling.

In a fiercely contested field, both methods were fiercely guarded. The result of this was the blurring of the line between correlation and causation, and hindcasting and forecasting. Slowly, but surely, an "assertion" was becoming "proof".

The first IPCC report in 1990 used the established temperature record created by Lamb. It's very different to the one we're familiar with today - and that's the work of CRU director Phil Jones, CRU's pioneer dendrochronologist Keith Briffa, and their colleagues in (mainly) US institutions.

You can see the difference here. 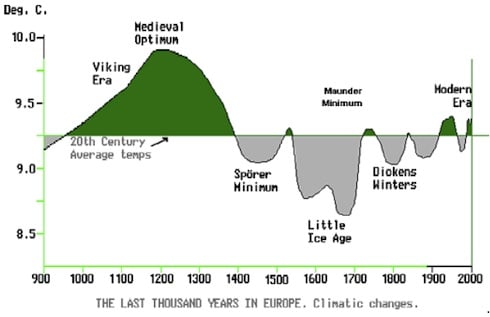 Although Lamb's version is supported by historical accounts, archaeology, geology and even contemporary literature, two key differences are the decreased significance of the Medieval Warming Period (CRU and its allies prefer the term 'MCA', or "Medieval Climate Anomaly") and a radically warmer modern period.

Jones and his team began to produce work that contradicted the established picture in 1990 - and CRU was able to do so from both ends. By creating new temperature recreations, it could create a new account of history. By issuing a monthly gridded temperature set while making raw station data unavailable for inspection, it defined contemporary data. So CRU controlled two important narratives: the "then", and the "now".

In the FOIA.ZIP archive, we find Jones unambiguous in an email: "We will be rewriting people's perceived wisdom about the course of temperature change over the past millennium," he wrote.

In text books co-authored with Ray Bradley (1992 and 1996) and a landmark paper with Ben Santer (1996), Jones described artificial reconstructions that questioned the established historical record. Jones and Briffa were both co-authors of a 1995 paper for Nature - Unusual Twentieth-century Summer Warmth in a 1,000-year Temperature Record from Siberia - that used a tree ring reconstruction from the Urals to claim that the mean 20th Century temperature is higher than any period since 914. Sympathetic researchers in the US produced similar graphs, again emphasising that modern warming (0.7C in the 20th Century), was anomalous.

Since these scientists declined to document their methodology and the raw sample, they were difficult to dispute. By 2001, with the IPCC's Third Assessment Report or TAR, the new version of history was the established one. The 'Hockey Stick' controversy only broke three years subsequently.

"We also have a data protection act, which I will hide behind."

That resulted in the Wegman report. Although CRU hadn't produced the Hockey Stick (the work of American metereologist Michael Mann) or used his statistical techniques, Wegman implicated leading CRU figures as part of a close knit network.

In our further exploration of the social network of authorships in temperature reconstruction, we found that at least 43 authors have direct ties to Dr. Mann by virtue of coauthored papers with him. Our findings from this analysis suggest that authors in the area of paleoclimate studies are closely connected and thus ‘independent studies’ may not be as independent as they might appear on the surface.

[...]the paleoclimate community; even though they rely heavily on statistical methods they do not seem to be interacting with the statistical community. Additionally, we judge that the sharing of research materials, data and results was haphazardly and grudgingly done. In this case we judge that there was too much reliance on peer review, which was not necessarily independent. Moreover, the work has been sufficiently politicized that this community can hardly reassess their public positions without losing credibility.

Wegman had identified other networks in climate science which also "peer reviewed" each other's work, removing criticism from the record, and acting as gatekeepers.

Over four years later the 'Climategate' archive provides evidence to support this. We find Jones discussing how to avoid FOIA requests, advising the deletion of email and telling his own information officers not to release data to critics. Earlier this summer, CRU said that it had failed to maintain the raw station data it had gathered, citing lack of storage space.

But to what purpose were these networks acting?

Next page: Playing politics - or feeding a demand?
Page: