Users of Android-based smartphones now have access to an app that provides a service unattainable from any of the 100,000-plus offerings in the iPhone App Store.

MiKandi, a Seattle, Washington start-up, is offering its eponymous app not through Google's own Android Market, but from its own website, downloadable free when accessed through the Android browser.

Google, like Apple, vets apps offered through its online store but, unlike Apple, the company also allows you to install non-vetted apps as you see fit. Which is the tack that the MiKandi crew is taking.

Apple may be justly criticized for its seemingly arbitrary app-approval process, but one thing is certain: jiggling jubblies and ham-slamming movies of the beast with two backs need not apply.

And so MiKandi is taking its adults-only wares to the Android (lowercase "m") market - although the company notes that the same fleshy opportunities will be offered for other devices soon. 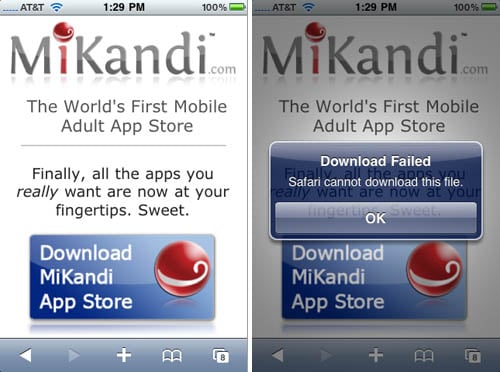 And they're hiring. If you're in the Great Northwest and you're a coder, designer, or marketeer, MiKandi wants to talk with you. But be forewarned. As their somewhat salaciously named Open Positions job board says, "Due to the adult content of our products, self-righteous, ignorant and/or annoying people need not apply." ®