Even less fun than that stupid beer-drinking app

The NHS has released an iPhone app that counts your units and lets you know when you're drunk, if the blurred vision and falling over isn't enough of a hint.

iPhone users can get the NHS Drinks Tracker from iTunes for free, and the National Health Service also provides Windows and Mac versions for those drinking heavily at their desks. Users of lesser smartphones will just have to watch for slurred speech as usual.

The program continues the Government's policy of letting people know they're killing themselves in the hope that will stop them - like a telephone advice line telling us to eat fruit and veg. We know when we're drinking too much, but at least with the new app we'll have quantifiable statistics to compare at work the following morning. 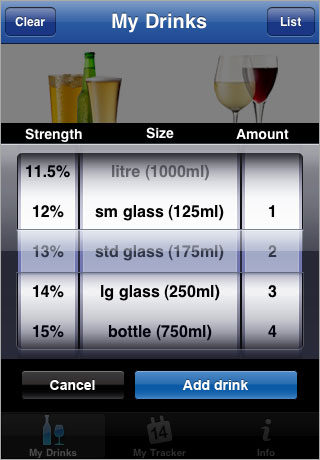 If you're capable of setting the levels then you're probably sober

Luckily for those without an iPhone last year's Java version, developed by Gencia for Liverpool Trading Standards, is still available to download (we're assuming the effects of alcohol haven't changed significantly in the last 12 months).

We can't help thinking that recording the percentage strength of drinks, then selecting the right serving size and quantity, might prove more difficult after a few jars, so we'll probably stick to our wallet-empty-best-stop-drinking policy. ®