LHC knocked out by ANOTHER power failure

'Birdy bread-bomber from the future' involved?

Exclusive The Large Hadron Collider - most puissant particle-punisher ever assembled by the human race - has suffered another major power failure, knocking not only the atomsmasher itself but even its associated websites offline. The machine remains unserviceable at present. However its crucial cryogenics seem to have been unaffected, and no catastrophic damage is thought to have occurred. 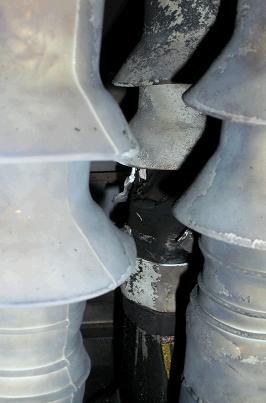 No baguette visible this time.

News of the outage emerged when keen amateur LHC-watchers (at independent site the LHC Portal) noticed that most of CERN's web presence related to the Collider had disappeared. Presently much of it returned, and with it came an official account of events released by control-room staff.

It appears that a failure occurred at 01:23 Swiss time this morning in an 18,000-volt power line at the Meyrin site above the mighty collider's subterranean circuit. This caused a power cut across the site, shutting down the main computer centre among other things and causing an abrupt cessation of operations.

However according to CERN controllers and the publicly-viewable web readouts (now back online) the LHC's magnets stayed chilled down to their operating temperature, just 1.9 degrees above absolute zero - colder than deep space. This is critical, as re-chilling the magnets had they warmed beyond a certain point would have been a lengthy and involved process.

"Diesels cut in OK" noted the controllers, adding that the Meyrin site is now drawing limited grid power from an alternative connection via the Prevessin site. The boffins don't anticipate resuming operations until at least 18:30 local time today. They later supplied the pic above of the faulty high-voltage component believed to have caused the problem.

The exact cause of the fault remains to be established, though in a machine so complex a lot of routine teething troubles are to be expected. However, with interest in the LHC so intense, colourful speculation is to be anticipated.

"Maybe it was a birdy bread-bomber from the future," jokes Chris Stephens of the LHC Portal - referring to the well-known wingnut theory that that the mere possibility of the LHC unmasking certain phenomena engenders forces which act backwards through time to sabotage it before this can happen.

We ourselves find it hard not to suspect the involvement of some pan-dimensional police force, seeking to prevent humanity acquiring parallel-universe portal capability before we're ready to use it responsibly. ®