Microsoft is committed to an open online strategy to include partners and developers and build market share, while unveiling updates to Bing with a decidedly Microsoft flavor.

It wouldn't be practical given Bing's current 9.9 per-cent US market share and third-position behind Google and Yahoo!, to push a Microsoft-online stack.

Nadella was speaking after Microsoft had unveiled new features in Bing search that draw on Microsoft's reading of algorithms and traffic and rely on its data-center computing and storage architecture. Also unveiled was a Bing Maps beta using its Silverlight media player and some labs technology to knit photos and maps together to provide an hyper 3D feel to city maps.

"Are we trying somehow to reinforce just a Microsoft stack and tools message? That's not our intent," Nadella told press Wednesday in San Francisco, California. 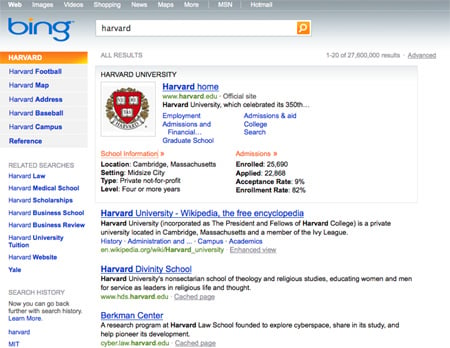 At the event, Microsoft unveiled Entity Cards and Task Pages for Bing search. These will be injected into searches and provide not just relevant information and reduce searches but to also make sure there's a reasonably high-degree of consistency in the way information is returned each time across Bing.

Entity Cards and Task Pages are designed to reduce the number of follow-on searches you make on a subject, by sucking in related structured data from third parties that's considered relevant to a query.

Microsoft demonstrated a search for "Harvard University." At the top of the Bing page, you got the university's web site along with data considered relevant about the university and admissions process that can be clicked on. One click served up the number of men and women admitted, for example. Also demonstrated was a search for "Cold Play" that returned the band's official home page, selected images, and links to relative information such on gigs and links through to buying tickets. 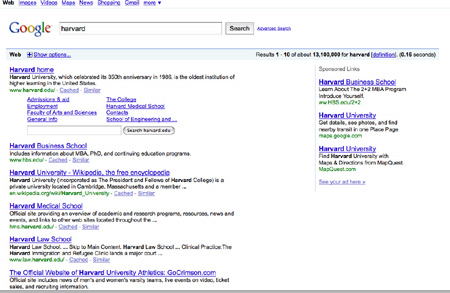 Google flunks it: more digging is needed to get the goods

A compare and contrast with a search on Google for Harvard revealed Bing packs more information in to a tight and clickable space than the same Google search. With Google, you'd need to do subsequent searches and scroll down as you want more information.

Microsoft has "a lot of cards" for all major universities, stores, and brands - including Apple - and there are cards for flu and related drugs.

The Bing Maps beta features Streetside - Microsoft's version of Google's Street View - and an enhanced version of Bing's existing aerial view of US cities. Microsoft's fleet of black cars have, apparently, been criss-crossing 100 major US cities photographing them in minute detail.

Streetside and aerial view combine Bing's existing 3D maps in Virtual Earth with Silverlight and Microsoft's Live Labs' Photosynth for Deep Zoom, stitching together aerial and street photos together, providing seamless transitions as you move along a street or fly above a city, and letting you transition from a map to a photo view in one game-like 3D view.

Looking ahead, Microsoft demonstrated the ability to combine photo synths - pictures taken by users and posted to maps - search using maps and to combine Twitter images, feeds, updates, and profiles with search results. Integration with Facebook is also planned.

Next page: The catch
Page: